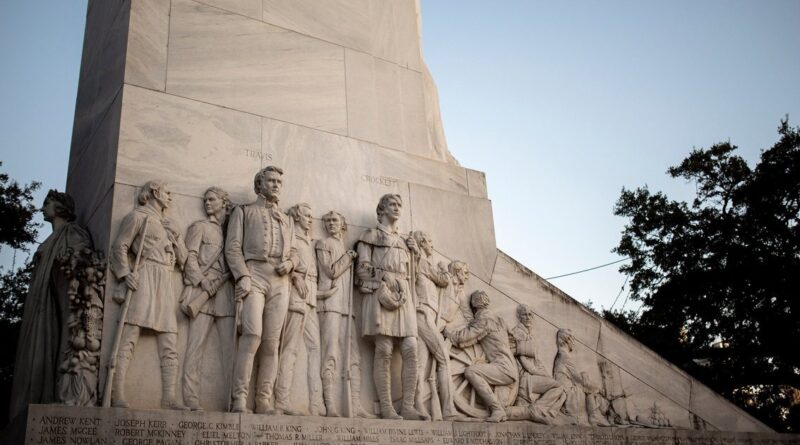 SAN ANTONIO — The Alamo needs a makeover; on that, at least, everyone agrees. Plaster is flaking off the walls of the nearly 300-year-old former Spanish mission, the most revered battle site in Texas history. Its one-room exhibit space can hold only a fraction of key artifacts. And the surrounding plaza is a tourist circus, packed with novelty shops and a Ripley’s Believe It or Not museum.

But Texans are deeply divided over how, exactly, to remember the Alamo. A $450 million plan to renovate the site has devolved into a five-year brawl over whether to focus narrowly on the 1836 battle or present a fuller view that delves into the site’s Indigenous history and the role of slavery in the Texas Revolution.

Generations of Texas schoolchildren have been taught to admire the Alamo defenders as revolutionaries slaughtered by the Mexican army in the fight for Texas independence. But several were enslavers, including William B. Travis and Davy Crockett — an inconvenient fact in a state where textbooks have only acknowledged since 2018 that slavery was at issue in the Civil War.

Indeed, an enslaved man named Joe, who was owned by Travis, survived the battle of the Alamo and became one of the primary sources of information about the 13-day siege, inspiring dozens of books and movies, including the John Wayne classic.

Key members of the state’s GOP leadership and some conservative groups are insisting that the renovation stay focused on the battle. A bill introduced by 10 Republican state lawmakers would bar the overhaul from citing any reasons for the Texas Revolution beyond those mentioned in the Texas Declaration of Independence — which does not include slavery.

“If they want to bring up that it was about slavery, or say that the Alamo defenders were racist, or anything like that, they need to take their rear ends over the state border and get the hell out of Texas,” said Brandon Burkhart, president of the This is Freedom Texas Force, a conservative group that held an armed protest last year in Alamo Plaza.

Democratic elected officials in San Antonio want the Alamo story to be told from other perspectives. Indigenous leaders, for example, want the site to show respect for its ancient role as a burial ground. Meanwhile, historians argue that support for slavery was indeed a motivating factor for the Texas Revolution, a fact that should be acknowledged at the site, even if it tarnishes some giants of Texas history.

“As we become more diverse as a nation and a people, we’ve got to learn how to talk about these difficult conversations, but we’ve got to talk about it with nuance. And that’s what’s missing right now in our society, is the nuance.”

Elected leaders have talked for decades about redeveloping the Alamo complex, which lies in the heart of San Antonio, not far from the famous River Walk. But those plans have always presented logistical challenges — the Alamo is owned by the state, while the adjoining plaza is owned by the city — as well as ideological ones.

The original plan, announced in 2017, called for repairing the Alamo, fixing up the plaza and building a world-class museum for artifacts, including a collection donated by rock musician Phil Collins, an Alamo enthusiast. It represented a rare alliance between the state’s Republican leadership and one of its more liberal cities, with San Antonio committing $38 million to the budget and the state of Texas pitching in $106 million. That left at least $200 million to be raised through donations.

But aspects of the plan quickly met with outrage, especially its treatment of the Cenotaph, a 56-foot monument to Alamo defenders erected in the plaza in 1940.

Under the plan, the Cenotaph would be moved 500 feet south and deposited in front of the historic Menger Hotel. The idea was to make the plaza “period neutral” and help visitors imagine how the Alamo looked as a mission and fort. But conservative groups rallied in armed protest and turned up at public meetings chanting “Not one inch!”

State leaders took up the cause, including Lt. Gov. Dan Patrick (R), who has closely aligned himself with former president Donald Trump. Last year, Patrick threatened to wrest control of the Alamo away from the General Land Office, which is led by George P. Bush, a potential political rival and son of former Florida governor Jeb Bush. Patrick took to Twitter to criticize Bush’s “lousy management.”

The struggle over the Cenotaph ended in September when the Texas Historical Commission, a state board whose members are appointed by Gov. Greg Abbott (R), voted to deny a permit to move it. Nearly half of the board members of the nonprofit raising funds for the Alamo renovation resigned in protest — raising doubts about where the rest of money would come from.

The board’s decision necessitated a new vote by the San Antonio City Council to authorize the project. Bush and San Antonio Mayor Ron Nirenberg threw their political muscle behind reviving the project. In early March, Nirenberg took the unusual step of replacing a city council member, Roberto Treviño, who had been leading two committees coordinating the project and had been staunchly in favor of moving the Cenotaph.

On April 15, the city council voted to go forward with a new plan that leases much of the plaza to the state for at least 50 years — and leaves the Cenotaph in place.

“The plan itself is much more than a single monument,” Nirenberg said in an interview. “My view, which is shared by the vast majority of San Antonians and Texans, is that regardless of your feelings on the Cenotaph moving, it’s not moving. This is the most significant piece of land in the entire state of Texas, and it deserves the reverence and dignity of a preservation project that has been a generation in the making.”

The day after the council vote, Nirenberg appeared with Bush and Patrick in Alamo Plaza to unveil a new exhibit with a replica of a cannon that fired upon the Mexican army. Bush and Patrick traded compliments, with Bush declaring that “there’s nobody in the state Capitol who cares more about Texas history” than Patrick.

Meanwhile, issues of race and slavery at the Alamo remain unresolved.

The Tap Pilam Coahuiltecan Nation, an Indigenous group, is still fighting to have the complex treated as a cemetery and to tell the story of the Indigenous people buried there, said Ramón Vásquez, one of its leaders.

Treviño, who represents much of central San Antonio, said his push to move the Cenotaph had been aimed at telling a more “inclusive story.” He also supported carving into the monument the names of enslaved people and Tejanos — native Texans of Mexican descent — who were present at the 1836 battle.

These days, Treviño wonders whether the city would have been better off redoing Alamo Plaza on its own.

“The issue for the project has been that there’s a lot of moving parts, and a lot of people who have tried to insert their version of history,” he said. “You have to remember that this city is predominantly Hispanic. And for many years, it has not felt like it’s seen itself in that story.”

Disclosure: Texas Historical Commission has been a financial supporter of The Texas Tribune, a nonprofit, nonpartisan news organization that is funded in part by donations from members, foundations and corporate sponsors. Financial supporters play no role in the Tribune’s journalism. Find a complete list of them here.