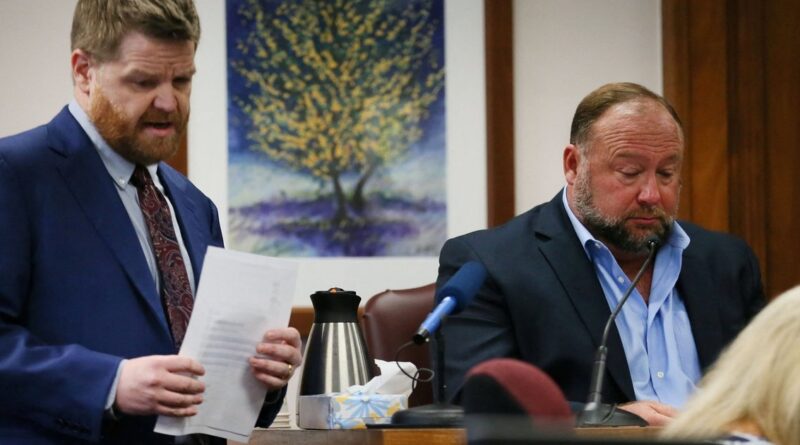 
For the latest breaking stories, sign up for our breaking news alerts.

A Texas jury on Thursday ordered conspiracy theorist and media personality Alex Jones to pay $4.1 million to the parents of a Sandy Hook shooting victim who sued him for defamation after he repeatedly claimed the school shooting was a hoax.

Neil Heslin and Scarlett Lewis were seeking $150 million from Jones after he told listeners of his Austin-based website and broadcast Infowars that the nation’s second deadliest school shooting — in which 20 children and six adults were killed — was faked by the government in order to take away Americans’ guns. His claims led his listeners to harass the victims’ families and make death threats against them for years.

The jury’s verdict delivers far less than that, but there is still an opportunity to award more money. Thursday’s verdict was to determine compensatory damages for the family. The case will now enter a new phase to determine punitive damages, which can be rewarded to punish a defendant for reckless, negligent or outrageous behavior or to deter future bad acts.

Jones has spread misinformation about national tragedies, COVID-19 and elections for years to a broad national audience. But lately, financial pressures — in part from multiple lawsuits from Sandy Hook parents — have put him in dire financial straits. His companies have filed for bankruptcy multiple times in recent months, including most recently during the defamation trial.

The Austin American-Statesman reported that Jones’ attorney, F. Andino Reynal, asked jurors to award a total of $8 — a dollar for each of the eight harms the court has already found Jones and his main company, Free Speech Systems, to have inflicted on Heslin and Lewis.

Jurors decided the amount of damages Jones owes the parents after listening to evidence and testimonies from a range of witnesses for seven days. During their testimonies Tuesday, Heslin and Lewis said Jones needed to be held accountable for the lies he told about the tragedy in order for them to try to heal from the trauma and loss they experienced.

Heslin said he wants the outcome of this lawsuit to restore his own credibility and reputation, which was tarnished by Jones, as well as the legacy of his son, 6-year-old Jesse Lewis.

The parents have previously described their son as a hero. During the Sandy Hook shooting, he ran into the elementary school hallway when he first heard shots, they said in a legacy.com obituary. Jesse confronted the shooter and yelled for other children to run. Nine children were able to escape the classroom where they were hiding.

During his testimony Wednesday, Jones admitted that the Sandy Hook shooting was “100% real.”

One of the plaintiffs’ attorneys, Mark Bankston, confronted Jones on Wednesday with several pieces of evidence that suggested Jones had lied during his testimony. Bankston told him that Jones’ own attorneys had accidentally sent the opposing counsel the contents of Jones’ phone from the last two years. He then pointed out several texts and other evidence that contradicted Jones’ previous testimony.

Throughout his testimony, Jones repeatedly portrayed himself as a victim. He said his identity was “stolen” and he was made into a “monster” by mainstream media after talking about the Sandy Hook shooting on Infowars.