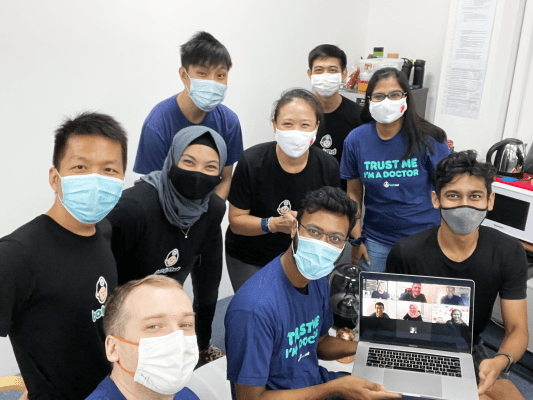 
Time is critical for healthcare providers, especially in the middle of the pandemic. Singapore-based Bot MD helps save time with an AI-based chatbot that lets doctors look up important information from their smartphones, instead of needing to call a hospital operator or access its intranet. The startup announced today it has raised a $5 million Series A led by Monk’s Hill Venture.

The funding will be used to expand in the Asia-Pacific region, including Indonesia, the Philippines, Malaysia and Indonesia, and to add new features in response to demand from hospitals and healthcare organizations during COVID-19. Bot MD’s AI assistant currently supports English, with plans to release Bahasa Indonesian and Spanish later this year. It is currently used by about 13,000 doctors at organizations including Changi General Hospital,  National University Health System, National University Cancer Institute of Singapore, Tan Tock Seng Hospital, Singapore General Hospital, Parkway Radiology and the National Kidney Transplant Institute.

Without Bot MD, doctors may need to dial a hospital operator to find which staffers are on call and get their contact information. If they want drug information, that means another call to the pharmacy. If they need to see updated guidelines and clinical protocols, that often entails finding a computer that is connected to the hospital’s intranet.

“A lot of what Bot MD does is to integrate the content that they need into a single interface that is searchable 24/7,” said Koh.

For example, during COVID-19, Bot MD introduced a new feature that takes healthcare providers to a form pre-filled with their information when they type “record temperature” into the chatbot. Many were accessing their organization’s intranet twice a day to log their temperature and Koh said being able to use the form through Bot MD has significantly improved compliance.

The time it takes to onboard Bot MD varies depending on the information systems and amount of content it needs to integrate, but Koh said its proprietary natural language processing chat engine makes training its AI relatively quick. For example, Changi General Hospital, a recent client, was onboarded in less than ten days.