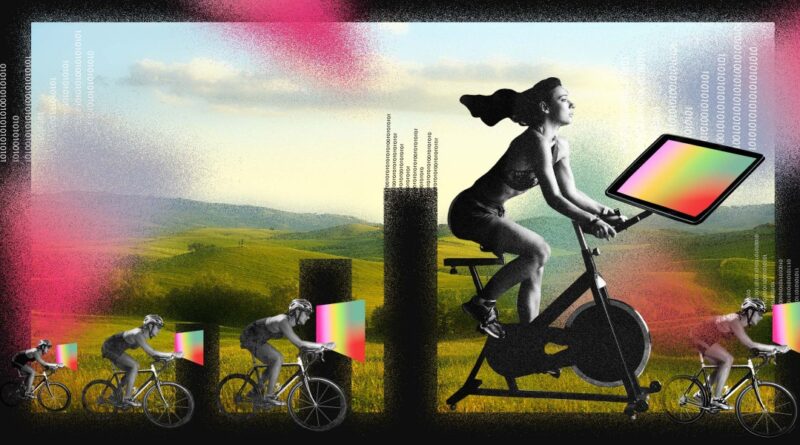 Ultimately, Zwift’s founders hope this new form of competitive cycling will one day appear at the Olympics—which could happen if the Olympic cycling body, the UCI, were to lend its backing. Things are arguably moving in this direction already. Last June Zwift made its debut at a new event called the Olympic Virtual Series, which was set up by the International Olympic Committee. And one of the differences between e-cycling and other elite track events is that it’s relatively easy for anyone to take part.

“Anyone, anywhere in the world, from the comfort of their own home, could go through a process of eligibility,” says Zwift’s strategy director, Sean Parry.

Working through the ranks

That’s how Easler made the cut. She was unsuccessful during a qualifying round open to users across the Americas but made it onto the USA’s national team via a separate qualifying process. She’s not a total newbie, having taken part in triathlons as a student. But virtual races are no less exciting than outdoor events. “You feel the adrenaline,” says Easler. “You know you’re up against real-life people who are really strong.”

Easler and her fellow competitors in the world championships will all receive the same smart trainer—a device that replaces the rear wheel on a stationary bike— so that they can compete on a level virtual playing field. Smart trainers automatically increase or decrease resistance to match the feel of the virtual road surface on a Zwift course. It’s even possible to simulate cobbles.

Data plays a big role on platforms such as Zwift, and riders tend to monitor their performance constantly. Their heart rate, speed, and power output in watts, among other statistics, are visible on screen at all times during a race. Commentators can pick out some of these stats live, to show spectators just how hard an individual competitor is working.

Easler, for instance, knows that she needs to keep her heart rate (measured in beats per minute) below a certain level in order to avoid crashing out. “I can recover if my heart rate hits 185, but if I hit 195, I can’t,” she says. Tracking her numbers on screen allows her to approach her limit without overstepping it, and it’s something she says she’s grown better at over time.

Real-time data on each rider’s performance will also allow Zwift and UCI officials to spot any possible cheaters at the championships. Unsporting competitors might use a variety of tricks—from lying about their weight, which could give them a power advantage, to trying to rig the game.