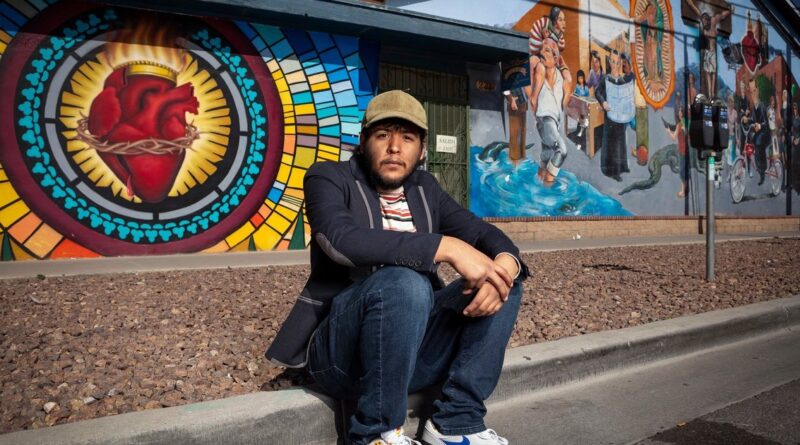 
EL PASO — When Juan Paul Flores Vazquez was about 4 years old, he crossed the U.S.-Mexico border with his aunt for what he thought was just a trip to a circus in California — “El Circo de Kiko,” inspired by “El Chavo del Ocho,” a popular Mexican television sitcom that began airing in the 1970s.

But instead of being away from his hometown of Mexicali, Mexico, for only a few hours, he stayed to reunite with his mother, who had already crossed the border. He has been living in the country for almost two decades.

Flores Vazquez now lives in El Paso. The 22-year-old is only one of about 105,500 participants in the Deferred Action for Childhood Arrivals program living in Texas. The Obama-era program with a degree of bipartisan support allows people brought into the country as children to avoid the threat of deportation.

“For the past four years, the DACA program has been under attack, so it’s been a lot of stress and trauma for me. And now I’m in a border town, so I have to be extra careful about Border Patrol,” Flores Vazquez said. “But I’m still hopeful.”

For many DACA recipients and undocumented immigrants living in the United States, Joe Biden’s electoral defeat of Donald Trump last year was a hopeful sign. It meant the end of the time in office for a president who was openly hostile to immigrants — and the arrival of one who had promised to push for a path to citizenship for people like Vazquez.

But Biden’s election has provided no easy answers. Despite Democrats controlling Congress and the White House, the U.S. Senate filibuster stands in the way of comprehensive immigration reform. With just 50 senators who caucus with Democrats and 60 votes needed to break a filibuster, the party in control has limited options: They can change the Senate rules, a move that might not have sufficient support among their members. Or they can compromise to bring Republicans along, which would likely require significantly scaling back ambitions.

As the Texas Republican delegation in Congress shows, there are certain immigration issues that Texans in Congress from both parties have expressed a willingness to work on, such as DACA, which may have a better shot at being passed into law.

The influx of migrants arriving at the U.S.-Mexico border also complicates the prospects of passing any meaningful immigration reforms because of the rhetoric from Republicans depicting the influx as a “crisis.”

“Fear-mongering rhetoric is not going to allow us to see our immigration system in a humane way, and that is required for us to have the robust infrastructure that the U.S. Citizenship Act provides,” said Tannya Benavides, an organizer with the South Texas-based No Border Wall Coalition, during a news conference Friday. “We can’t equate people to a tidal wave, to a crisis or anything that dehumanizes migrants that are coming through our ports of entry. That is not going to help us make the case for the robust infrastructure that we need.”

On Inauguration Day, the Biden administration unveiled the U.S. Citizenship Act, a framework of sweeping immigration reforms that aim to clear employment-based visa backlogs, protect workers on visas from exploitation and establish a pathway to citizenship for undocumented immigrants, among other goals. The Biden administration also preserved and fortified the DACA program through an executive order the same day.

In early February, U.S. Sens. Dick Durbin, D-Illinois, and Lindsey Graham, R-South Carolina, reintroduced the Development, Relief and Education for Alien Minors Act, which hasn’t progressed through Congress since. The legislation would provide temporary legal status to unauthorized immigrants who were brought into the U.S. as minors. Durbin and Graham tried to get the DREAM Act through Congress in 2017 and 2019, to no avail. Durbin has repeatedly tried to pass the DREAM Act since he first introduced it in 2001.

A few weeks later, Congressional Democrats officially introduced Biden’s immigration proposal into Congress through two companion bills in the House and the Senate — HR 1177 and SB 348. Neither has made much progress, either.

A ruling by U.S. District Judge Andrew S. Hanen of Houston on whether the DACA program is lawful is also expected soon. That could change the sense of urgency on finding a legislative fix for DACA and possibly on reforming the nation’s widely criticized immigration system.

“My family is very hopeful. I know my tía — the one who brought me into America — is super hopeful. She’s always sending me articles and being optimistic,” Flores Vazquez said.

Texas Republicans have come out against Democrats’ calls for comprehensive change. That’s an issue because of the filibuster.

Democrats were able to pass a massive coronavirus relief package through the Senate with no Republican support because of a parliamentary procedure known as reconciliation, which allows for simple majorities to bypass a filibuster and approve certain bills related to the federal budget. But immigration bills are unlikely to benefit from that same rule, so without a rule change, Democrats would need to gain the support of 10 Republicans to push a bill through.

“The margins are so slim, but one of the things that makes reform possible is that immigration is very high on the administration’s agenda. That makes a difference,” said Doris Meissner, senior fellow at the Migration Policy Institute and the director of the institute’s U.S. Immigration Policy Program. “But people in Congress who are proponents of immigration reform have also signaled they are interested in any win.”

Meissner, a former commissioner of the U.S. Immigration and Naturalization Service, said there is “very little broad-based support” within the Republican Party for any kind of “legalization” program — a top priority for the Biden administration. She added that now is a ripe time for immigration legislation of any kind because “the further away that it is from upcoming elections, the more likely there is a chance that enough legislators will be willing to take the risk.”

Texas Republicans have shown few signs that they will jump on board for Biden’s first proposal. U.S. Sen. Ted Cruz, R-Texas, called the legislation “unconstitutional, dangerous and misguided.”

“Bottom Line: It’s clear that today’s Democratic Party has been so radicalized that they are intent on prioritizing people here illegally ahead of the safety of Americans. President Biden’s policies are not the immigration reform Americans desperately need,” he said in a press release in late February.

In an opinion piece for the Daily Caller, U.S. Rep. Chip Roy, R-Austin, called Biden’s executive actions an “immediate mockery of our immigration system,” arguing that rollbacks of the stringent Trump-era immigration policies signal to the world “that America’s immigration laws were simply made to be broken.”

Perhaps the biggest concern among congressional Republicans in Texas is border security. U.S. Rep. Brian Babin, R-Woodville, who co-chairs the Congressional Border Security Caucus, shared a Fox News article about a mother whose son was killed by an undocumented immigrant in 2002, slamming Biden for his planned deportation moratorium.

“Our Angel Families know firsthand the tragic consequences that come with open, unsecured borders and unenforced immigration laws,” Babin wrote. Biden “should pick up where Donald Trump left off and continue securing our southern border – our lives depend on it.”

However, according to a study in the Proceedings of the National Academy of Sciences of the United States of America, a peer-reviewed scientific journal, undocumented immigrants have the lowest felony arrest rates in Texas when it comes to violent, property, drug and traffic crimes, compared with legal immigrants and native-born citizens. The study analyzed a combination of criminal history and immigration status data provided by the Texas Department of Public Safety.

Another staunch advocate for border security is freshman U.S. Rep. Tony Gonzales, R-San Antonio, who represents a congressional district with more than 800 miles of Texas-Mexico border.

“I’ve made my way around the district over and over again to speak with Border Patrol agents, sheriffs, local law enforcement officers, nonprofits, ranchers, farmers and local elected officials to just try to understand it all,” Gonzales told The Texas Tribune in a phone interview. “I believe that if you have this broad package that just tries to do everything, it is doomed to fail, and nothing will happen. Thats why we haven’t had success.”

Gonzales said he thinks the best approach to immigration reform is not comprehensive, but rather piece by piece and targeted.

“I do think there’s an appetite for immigration reform if we do it in the proper manner. This issue is very divided, but if you try to answer things one by one, it just all comes to part. And I think one of those things is to start with plussing up resources for our Border Patrol agents, especially with what they’re dealing with right now,” he said.

Gonzales introduced his first piece of legislation in early February, targeting border security. It would double funding for “a grant program that allows local law enforcement to augment border patrol efforts at the southern border,” from $90 million to $180 million for each of the next few budget years. A portion of this increased funding would be for the procurement of technology and equipment like sensors, communications equipment and drone technology.

But Josiah Heyman, director of the Center for Inter-American and Border Studies at the University of Texas at El Paso, said Gonzales’ favored incremental approach isn’t always a good thing.

For Texas Democrats, a pathway to citizenship for all noncitizens is a key priority.

“Now more than ever, a path to citizenship should not only be part of our economic recovery but also be a bipartisan priority,” U.S. Rep. Joaquin Castro, D-San Antonio, said in a statement to the Tribune.

Texas Republicans have largely scoffed at attempts to help undocumented immigrants eventually gain citizenship. U.S. Rep. Dan Crenshaw, R-Houston, has tweeted that it would be “a slap in the face to millions of immigrants that did it the right way.”

Meissner, the former head of INS, said that finding a solution for the hundreds of thousands of so-called Dreamers in the U.S. is Congress’ biggest shot at reforming anything.

“The DACA population has really become well known by legislators and people in the country overall. There is a strong public opinion factor here, particularly in favor of the DACA population, that they really should be allowed to have a long-term status in the United States, that they are a population that does contribute in important ways,” she said.

In Texas, a coalition backed by U.S. Sen. John Cornyn consisting of chambers of commerce, economic development leaders and institutions of higher education is calling on Congress to pass legislation to grant Dreamers permanent legal status.

“I’m encouraged by Sen. Durbin reintroducing the DREAM Act with the support of Sen. Graham, and we’ll see if Republicans are serious about working together to provide permanent protection,” Castro told the Tribune. “The American people across the political spectrum overwhelmingly support immigration reform, and Congress needs to deliver.”

Gonzales said the DACA program “makes a lot of sense” to him, but he’s wary of “common-sense” solutions being buried in a broader package that would not pass through the upper chamber.

“This is really ultimately all about the Senate, so that still remains to be seen,” Meissner said. “And generally, there is not a very robust center anymore in our politics.”

Disclosure: The University of Texas at El Paso has been a financial supporter of The Texas Tribune, a nonprofit, nonpartisan news organization that is funded in part by donations from members, foundations and corporate sponsors. Financial supporters play no role in the Tribune’s journalism. Find a complete list of them here.