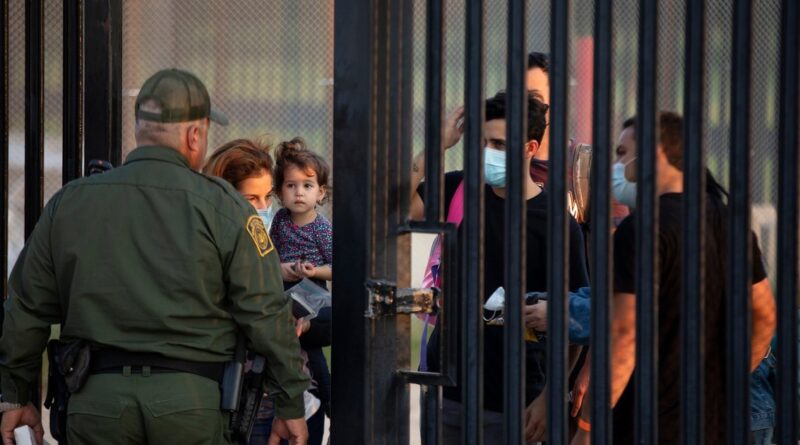 
This article is co-published and co-reported with Military Times, an independent news organization reporting on issues important to the U.S. military. Sign up for its daily Early Bird Brief newsletter here.

For 24/7 mental health support in English or Spanish, call the Substance Abuse and Mental Health Services Administration’s free help line at 800-662-4357. You can also reach a trained crisis counselor through the National Suicide Prevention Lifeline by calling 800-273-8255 or texting 741741.

The letter comes as another service member, based in the city of Pharr, survived a suicide attempt Sunday, according to an incident report obtained by Army Times and The Texas Tribune.

In a letter addressed to Col. Daniel Heape, inspector general of the Texas Military Department, the lawmakers said Operation Lone Star was “severely eroding the readiness of our National Guardsmen and their ability to be deployed on federal orders.”

“It is clear State leadership does not have our troops best interest in mind. Instead, they continue to use them as political props, whether it be through assigning them to support OLS or by refusing to comply with federal vaccine requirements intended to protect them from COVID-19,” the letter read, using an abbreviation for Operation Lone Star. “As such, we urge you to launch a full investigation into TMD’s actions related to OLS and how this mission is impacting the well-being, morale, and overall readiness of our troops so Texans can have a full accounting of what is happening to these servicemembers.”

The lawmakers referenced a story by the Army Times in late December that reported on four suicides by soldiers tied to Operation Lone Star. In January, the publication reported on another suicide attempt tied to the mission and another soldier who died when he accidentally shot himself in an alcohol-related incident.

The soldier who survived Sunday’s suicide attempt was transported to the hospital after telling another soldier she had ingested prescription medications and alcohol in her unit’s hotel, according to the incident report.

On Tuesday, Abbott pushed back on the reports of suicides being linked to his border mission, saying his detractors were “just playing politics.” He pointed to the military’s broader suicide problem, adding that the Texas suicides are under investigation and he suspected that not all “actually occurred during Operation Lone Star.”

In fiscal year 2017, the Texas Army National Guard saw nine suicides, 14 attempts and 42 ideations among its troops, according to budget documents. Army Times asked state officials for more recent numbers Thursday but did not immediately receive a response.

On Thursday, Abbott spokesperson Nan Tolson said President Joe Biden and congressional Democrats “have turned a blind eye to the United States’ borders that they all swore to protect and defend.”

“The reckless open border policies have created an absolute crisis along our southern border, with a 61-year record-high number of illegal immigrants surging into our state and millions of lethal doses of drugs like fentanyl streaming into our country,” Tolson said in a written statement. “Texas has had no choice but to step up and address this crisis in the wake of President Biden’s and Congressional Democrats inaction.”

Tolson said Operation Lone Star had deployed more than 10,000 Texas National Guard soldiers and DPS troopers, erected temporary barriers and built a state-funded border wall to deter border crossings. She also touted Abbott’s $36 million in grants to local law enforcement and prosecutors who he directed to arrest migrants and prosecute them for state crimes. Tolson said the operation had resulted in more than 186,000 migrant apprehensions, more than 10,000 “border-related” crime arrests and more than 208 million lethal doses of seized fentanyl.

But Tolson did not answer questions about poor working conditions, habitual pay problems and suicides tied to the congressional request for an investigation.

“Texas will do whatever it takes to secure our southern border and protect Texans in President Biden’s absence, because nothing is more important than the safety and security of our communities,” Tolson said.

“These alarming reports call into question decisions made by the leadership of the TMD and Governor Abbott, and necessitate an immediate impartial and comprehensive investigation of all TMD actions related to OLS and the conditions of National Guard troops deployed at the U.S.-Mexico border,” the letter read.

Abbott deployed Operation Lone Star last March after blaming President Joe Biden for an increase in migrant crossings at Texas’ southern border. The mission sent a sharp increase of Texas National Guard and Texas Department of Public Safety troopers to the border in an effort to curb migrant crossings.

But some soldiers on the border have said the mission lacks a clear directive and that they play little role in apprehending migrants attempting to cross into Texas, according to the Army Times. Other troops at busier sections of the border have expressed concerns about a shortage of first aid and protective equipment for their interactions with people who cross, retired Command Sgt. Maj. Jason Featherston, the Texas Army National Guard’s former top enlisted soldier, said last week in a news conference with Allen West, a GOP candidate for governor and a former lieutenant colonel in the U.S. Army.

Last fall, the Texas Military Department increased the number of troops deployed to Operation Lone Star from 1,200 in June to about 10,000 by November. The department said the drastic increase led to “austere conditions” for troops. The department’s public affairs office said all pay issues were resolved as of last week and has cautioned against drawing a link between the operation and the suspected suicides.

On Tuesday, Abbott told the Tribune “all paycheck issues have been resolved.” Tolson, his spokesperson, did not respond to a question about the ongoing paycheck issues.

In a statement signed by its public affairs office, the Texas Military Department acknowledged that pay issues are ongoing. The pay issues in the 36th Infantry Division, the statement said, are “a portion of the total number of service member issues that our agency is tracking and working to rectify.”

“The exact number of service members experiencing these issues has and will continue to change as we have a large team dedicated to working one-on-one with service members to address their issues and resolve each as quickly as possible,” the statement said. “We take correcting pay issues for our service members seriously and track every issue at the department level.”

The department did not respond to questions about the request for an inspector general investigation.

The congressional Democrats praised National Guard soldiers for their other recent state deployments on recovery efforts after last February’s deadly winter storm, which left millions of Texans without power for days, and the aftermath of Hurricanes Ida and Laura in Texas and Louisiana. But they expressed concern that consecutive deployments “take a toll on a servicemember who has already spent weeks away from home.”

“Being activated again for OLS, sometimes with less than a four-day notice, is leading troops to scramble to get their civilian affairs in order, if they are able to, without any idea when they may be able to return to their civilian lives,” the letter read.

The letter from the congressional Democrats comes as criticism of the mission mounts against Abbott for his handling of the troops. Earlier this month, West blasted the mission as a political stunt that led soldiers to “rush into a failure.” West also called for the resignation of the Texas National Guard’s top military leader, Texas Adjutant General Tracy Norris.

West retired from the military in 2003 after he was investigated for torturing an Iraqi detainee for information.

Beto O’Rourke, the leading Democratic candidate for governor, has also criticized Abbott’s handling of the mission, saying he has failed to provide the deployed troops basic rights and calling on the governor to send the troops home if he cannot provide them.

On Wednesday, state Rep. Alex Dominguez, D-Brownsville, announced in an op-ed in the Military Times that he’d asked the House General Investigating Committee to begin an investigation into the suicides and morale on the mission. Dominguez, chair of the chamber’s veterans caucus, also called on Abbott to impose a moratorium on further troop deployment until the House completed its investigation and Abbott released a plan to address the morale crisis on the mission.

Tolson, Abbott’s spokesperson, did not answer questions about Dominguez’s call for an investigation or his request for a moratorium on deployments. State Rep. Matt Krause, R-Fort Worth, the chairman of the House General Investigating Committee, declined comment.

Dominguez also requested information from the Texas Military Department regarding Operation Lone Star, as well as recommendations for the Legislature on how to remedy issues with housing, pay, benefits and leave.

Other legislative leaders, including the lawmakers in charge of committees overseeing the Texas Military Department, have also expressed concern following the Army Times reports and have begun seeking information from the department.