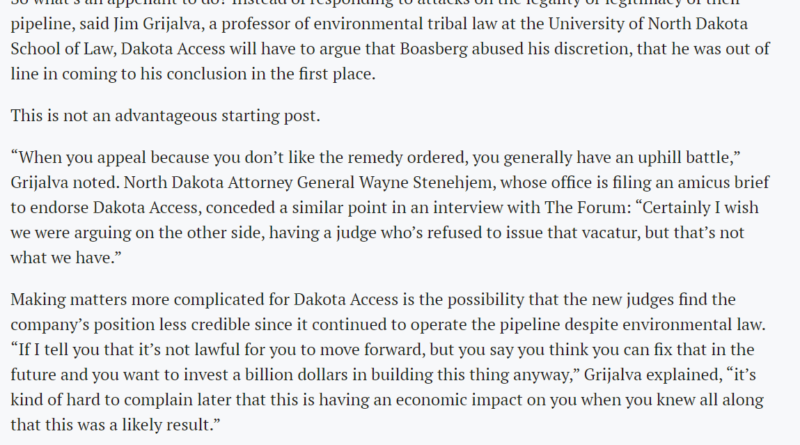 
Four years go by fast and you had better have your ducks in a row for changing political conditions. Kelcy Warren, now Executive Chairman of the Board at Energy Transfer (ET) had long counted on a far friendlier business atmosphere to advance some corporate goals like the completion of the Dakota Access Pipeline. In fact, he maximized his advantage by completing the pipeline before all the environmental requirements were satisfactorily completed. He gambled at the time that no one would shut down a running pipeline. However, the established law takes a very different view of this:

“Is the DAPL ruling solid?” 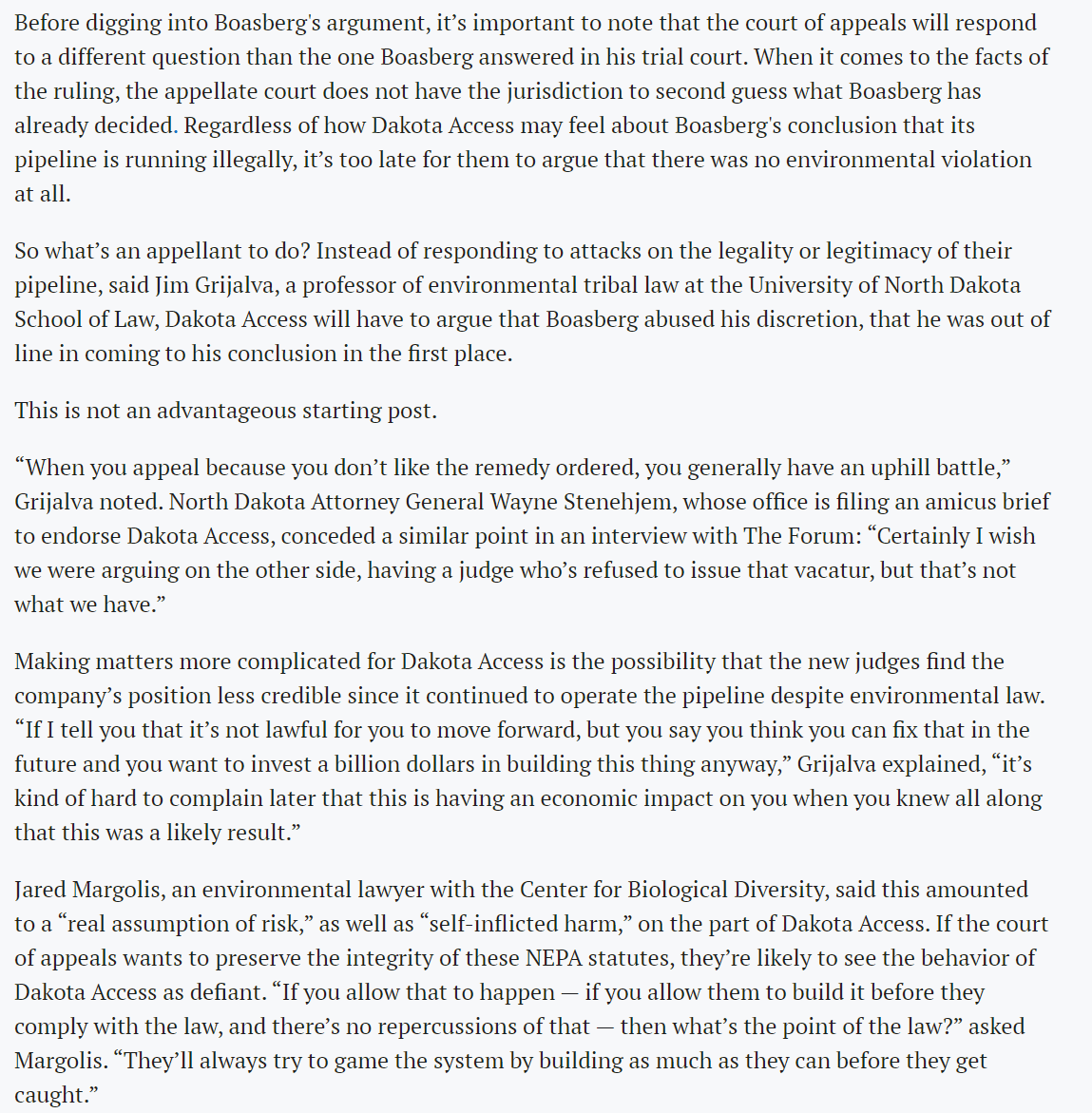 The argument above sort of undercuts a lot of wishes that this can go to the supreme court. The main finding that there were environmental deficiencies is already not appealable anymore according to the above source. The was furthered by a warning from the appeals court when the appeals court granted the pipeline permission to continue to operate.

Up until the election, the main source of concern was the ability of the company to successfully appeal the ruling to “empty the pipeline” which was issued along with the voiding of the permit that is being appealed in the above slide as well.

Most of this was caused by failure of the Army Corps of Engineers to follow the order or judgement that the district court made in 2016. That failure led to an order by the district court proposing the stronger measures including that “empty the pipeline. Note that this order in 2020 references the 2016 and details some of the steps taken by the defendants (The Army Corps of Engineers and Energy Transfer) to overturn or modify this order. Basically there was four years of mostly failure and then the defendants entered the court in 2020 to admit they had not satisfied the 2016 order.

This behavior of the Army Corps of Engineers was at least tolerated and maybe encouraged by President Trump and his administration. But an incoming President Biden will be a very different story. Energy Transfer risks a far more “hands off” and even handed approach from the coming administration. Therefore the ability of the pipeline to operate while the appeals process proceeds is far more likely in question than it was before the election.

The Wall Street Journal believes that an operating pipeline is more difficult to cancel. The error of this logic is that Energy Transfer built and completed the pipeline basically in defiance of established industry practice and the prevailing environmental law. Compare this to Equitrans Midstream (ETRN) which stopped all construction when some Mountain Valley pipeline issues went to the Supreme Court and then began to resume construction activities after they won in court. Energy Transfer not only did not stop the work, but they also operated the completed pipeline and did not win in court.

If anyone is going to continue to build and operate anything at a time when a court can possibly interpret that action as any form of legally defined defiance, then the responsibility for those actions falls completely on the party executing that action.

“But the politics of emptying Energy Transfer’s (NYSE:ET) Dakota Access Pipeline – which has been running for years – would be more difficult if the pipeline is allowed to continue operating, after a federal judge ruled earlier this year that a U.S. Army Corps of Engineers environmental review of the project’s impacts was insufficient.”

Therefore unlike the quote above (which has a logic that has appeared a lot in the news), it very much appears that Energy Transfer has handed the incoming administration a golden opportunity to appease the environmental wing of the democratic party while appearing to be the “good guys” in the process by punishing a company with a very poor safety track record as shown below.

A properly permitted and operating pipeline would be a very different matter. Then the logic in the quote does apply. But all the appeals court did was give itself time to consider the issues at hand. An initial stay of a district court order upon appeal is pretty common. What is very uncommon is the warning given about the inability of the parties appealing to prevail so far and probably upon appeal. Consider the now begun Environmental Impact Study as the first “crack in the wall” (though not a confession) that maybe this case will be resolved in favor of the defendants.

“The three judges on the U.S. Court of Appeals for the D.C. Circuit who listened to the case questioned him on numerous parts of the Corps’ argument, including the agency’s interpretation of pipeline operator Energy Transfer’s safety record. They referenced data for a subsidiary, Sunoco, showing that the company had 1.42 accidents per 1,000 miles of pipeline in 2019. That falls above a 2017 national industry standard of 0.848 accidents per 1,000 miles.”

Even though management told shareholders that they would safely operate the pipeline, the judges managed to have information that Energy Transfer was definitely not a safe operator. That court information should concern any investor in the company.

The accident rate above is nearly double the standard. Any company I ever worked for would be alarmed at 10% over standard. The number shown above is so outrageous that it is likely to be industry leading in the wrong direction.

If the incoming administration wants to refuse to issue a now voided permit again, then the safety issues should make this an even easier task. In Lebanon County, Pennsylvania alone, Energy Transfer has paid $780,000 in fines with yet another spill pending of the administrative law agenda. The Mariner East II pipeline has a horrible construction track record in just about every county in which the pipeline travels through. The pipeline now has more than $13 million in fines as of August.

Management has made it very easy for the incoming administration to refuse to issue a permit for the pipeline already in operation in North Dakota. The North Dakota Access Pipeline was built before all environmental issues were settled on a clear gamble that the pipeline would be allowed to continue to operate once it was built.

But the oil and gas industry entered a cyclical downturn in this case caused by coronavirus demand destruction. That has led to excess capacity throughout the industry. 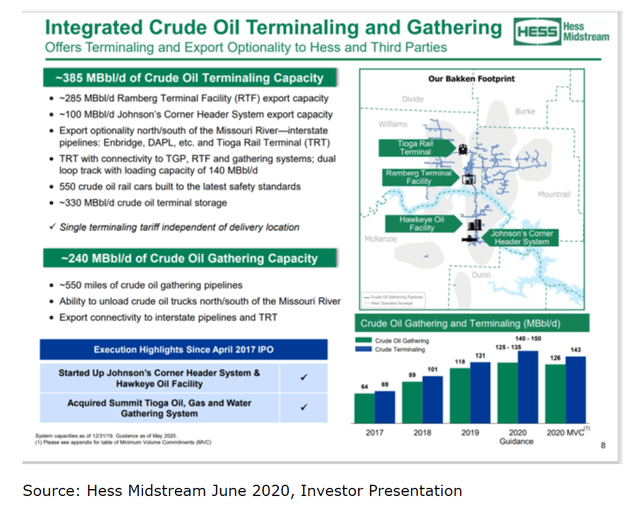 Thanks to Hess Midstream (HESM), Hess Corporation (HES) has a number of markets to get the oil to. Therefore the elimination of one pathway probably will incur some extra costs for awhile. But the midstream is clearly in position to be a part of the permanent solution to eliminate those temporary extra costs.

This is one example of several that the district court surveyed before issuing the “empty the pipeline” order. Now the appeals court did give the district court different criteria to review before again recommending that the pipeline be emptied. But what is clear is that the tight capacity during the previous boom is now clearly a thing of the past. Therefore the customers like Hess do not appear to be significantly damaged by the absence of the pipeline. That “damage” is a major concern before the order would be carried out.

Therefore the Dakota Access Pipeline may find itself on the alter of political compromise. The union jobs are not affected as the pipeline is complete. If anything, the unions would have more work to reroute the pipeline to bring the pipeline in compliance with whatever conditions are determined by the appeals court. In short the incoming administration has a lot of incentives to refuse to issue a new permit and very few pushbacks that encourage the issuance of this permit.

If this proves to be the case, then management has only itself to blame. A properly permitted, built, and currently operating pipeline would be a very different political calculation. But this management was over-confident enough to make it easy for the incoming administration to take a very tough road. Time will tell what happens here.

I analyze oil and gas companies and related companies like Energy Transfer in my service, Oil & Gas Value Research, where I look for undervalued names in the oil and gas space. I break down everything you need to know about these companies — the balance sheet, competitive position and development prospects. This article is an example of what I do. But for Oil & Gas Value Research members, they get it first and they get analysis on some companies that is not published on the free site. Interested? Sign up here for a free two-week trial.

Disclosure: I am/we are long ETRN HES HESM. I wrote this article myself, and it expresses my own opinions. I am not receiving compensation for it (other than from Seeking Alpha). I have no business relationship with any company whose stock is mentioned in this article.

Additional disclosure: Disclaimer: I am not an investment advisor, and this article is not meant to be a recommendation of the purchase or sale of stock. Investors are advised to review all company documents, and press releases to see if the company fits their own investment qualifications.