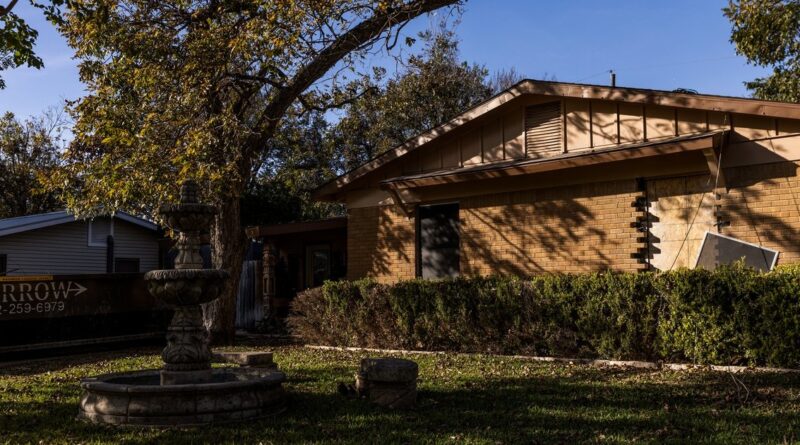 DALLAS — On a Sunday night in October, weeks after her landlord served her eviction papers, a pain formed in Daniela Hernandez’s chest.

The pain kept Hernandez up all night. It didn’t go away by the next morning. Or the next.

Three days after the pain began, a doctor at a clinic diagnosed the problem: Hernandez was having a dayslong panic attack. The likely cause? The fear that she and her 10-year-old son may soon become homeless.

If that came to pass, Hernandez doesn’t know who she would turn to. She immigrated from Mexico more than a decade ago and settled in Dallas — and has no other family in the United States.

Hernandez is one of thousands of Texans living with the threat of eviction since the end of the federal government’s temporary ban on evictions in late summer — and among those the moratorium wouldn’t have helped anyway.

Since the moratorium ended in mid-August, eviction filings in three major Texas cities tracked by Eviction Lab — Dallas, Houston and Fort Worth — have risen to nearly pre-pandemic levels as landlords file thousands of evictions each week.

Filings have ticked up slightly but are still relatively low in Austin, the only other Texas city studied by Eviction Lab and the only one where some tenant protections remain.

Eviction trends aren’t as clear throughout the rest of the state. Local evictions are difficult to track, and statewide eviction data is hard to come by. Eviction Lab, a research center based at Princeton University that tracks eviction filings, analyzes only a few metro areas in Texas.

The COVID-19 pandemic and the ensuing economic crisis threw hundreds of thousands of Texans out of work and made it that much harder for the poorest households to make rent.

Now, evictions have surged despite an abundance of job openings and financial help for struggling renters — though tenants’ advocates say the billions of dollars sent to Texas to help keep people in their homes has undoubtedly prevented an even larger wave of evictions after the moratorium ended.

“I think landlords have just gotten to the point where they’re just issuing evictions as soon as someone gets behind,” Melton said. “But most of the people, quite frankly, are not a month behind. Most of them are many months behind. And they’ve been waiting for months for Texas rent relief.”

For households that were struggling even before the pandemic, the economic fallout from COVID-19 made their problems worse as job opportunities dried up and new expenses and responsibilities — like caring for children when schools and day cares closed — piled on, said Dana Karni, an attorney for Lone Star Legal Aid, which provides free legal services to low-income Texans.

On top of that, tenants in Texas’ major metro areas have had to deal with dramatic rent increases sparked by a housing crunch over the past year.

“This is like a black hole,” Karni said. “It absolutely sucks the financial life out of our applicants.”

Amid the pandemic, state and local officials adopted measures to help keep people in their homes, such as federally funded rental assistance programs and so-called right-to-counsel programs that provided free legal representation for tenants facing eviction.

Those benefits are now drying up. The state agency that runs Texas’ $1.9 billion rent relief and eviction diversion program shut the door to new applicants earlier this month, citing overwhelming demand for the federally funded program.

Some cities and counties could even see millions of federal dollars sent to them to help struggling renters now be seized by the U.S. Treasury Department because they haven’t spent the money fast enough, according to an analysis by the nonprofit advocacy group Texas Housers.

And in landlord-friendly Texas, lawmakers in the Republican-dominated state Legislature left Austin this year without approving greater protections for tenants.

“We already know that this crisis didn’t start because of the financial downturn during the pandemic,” said Julia Orduña, Southeast Texas regional director for Texas Housers. “The eviction crisis has been happening long before the pandemic and will continue to happen. We just never had a microscope up to it the way that we do right now.”

“We don’t have any other place to go”

Many of the eviction cases now flooding Texas court dockets involve tenants directly affected by the pandemic. But many stem from run-of-the-mill economic hardship.

Joan Lopez, a 69-year-old retired pharmacist in the Army Medical Corps, and her husband Hector made rent at an apartment complex in Rockdale, a town of more than 5,000 people between Round Rock and College Station, with her pension and his pay as a part-time maintenance worker for the property.

But months ago, Hector, 70, began to have trouble breathing — and was diagnosed with chronic heart failure. He couldn’t work while he recovered and his medical bills piled up. As a result, the couple fell behind on rent — and the landlord served them with an eviction notice.

Staying with family members wasn’t an option. Lopez said her daughter, who also lives in Texas with her 13-year-old son, doesn’t have room for them and can’t afford to help.

“I’m going to be a burden to them,” Lopez said.

In the meantime, Lopez has canceled her health insurance to save $650 a month that she plans to put toward a deposit for a new place. For now, she and her husband plan to live in their van as the winter months bear down.

“We don’t have any other place to go,” Lopez said.

“The apartment manager is going to kick us out”

In Dallas, Hernandez is trying to avoid a similar fate for her and her 10-year-old son.

Hernandez contends that she’s never missed a rental payment — even when the pandemic thrust her out of a job cleaning commercial buildings for three months. Then, she had just enough money saved to cover rent — but at times had to sacrifice power and even groceries to do so.

“Sometimes, I didn’t have anything to eat so I could afford to pay rent,” Hernandez said. “Other days, I didn’t have electricity because I would think, ‘I can live without lights for a few days, but not without a roof over my head,’ especially with my son.”

Fowler Property Management, the company that oversees Hernandez’s complex, declined to discuss the specifics of Hernandez’s case. But the firm said in a statement it has “gone above and beyond during this challenging time” by offering payment plans to residents, negotiating or waiving late fees and pointing tenants’ toward rent relief programs.

“These efforts have proven to be extremely effective at keeping tenants in their homes,” the company wrote in an unattributed statement.

Still, the company has issued eviction notices to five households on the 46-unit property since August, according to data provided by Eviction Lab.

At this point, Hernandez is more than happy to leave. But she’s in a bind: The Dallas Housing Authority won’t help her relocate because she hasn’t paid off her balance with Fowler, who she said won’t speak with her about how they calculated her unpaid rent. The specter of another eviction filing looms.

The stress has been hard on her son. Hernandez tried to shield him from the situation. But in August, he discovered the court paperwork showing management had started the process to evict them.

“He told me, ‘They’re kicking us out of the apartment, aren’t they?’” Hernandez recalled. “I told him, ‘Yes, but don’t worry because everything is going to be OK.’”

At school, when his teacher asked the classroom how the students’ day was going, her son said: “I feel really sad because we don’t have anywhere to live. The apartment manager is going to kick us out.”