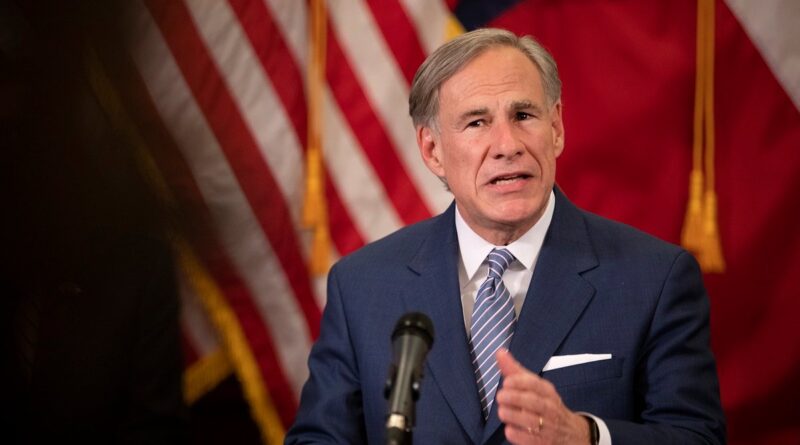 
Need to stay updated on coronavirus news in Texas? Our evening roundup will help you stay on top of the day’s latest updates. Sign up here.

Gov. Greg Abbott said Tuesday he is open to reconsidering his executive powers during state emergencies, a point of contention among some fellow Republicans during the coronavirus pandemic, and that his office is “offering up some legislation ourselves on ways to address this going forward.”

“What we are working on — and we’ve already begun working with legislators — is approaches to make sure we can pre-plan how a response would be done, but it has to be done in a way that leaves flexibility to move swiftly,” Abbott said in an interview with The Texas Tribune.

Abbott spoke with The Tribune the day after his State of the State speech in which he laid out his agenda for the 2021 legislative session, which started last month. As the pandemic has dragged on, some GOP lawmakers have grown uneasy with how aggressively Abbott has used his executive authority, particularly when it comes to business shutdowns and mask mandates. In the speech, Abbott promised to “continue working with the Legislature to find ways to navigate a pandemic while also allowing businesses to remain open.”

Abbott said in the interview that he still wants the governor to have the ability to do things like cut regulations in the time of a disaster, saying there is an “absolute need for speed” in such instances that the legislative process cannot provide. That is especially true, he added, “during a pandemic, when sometimes it’s hours that matters, especially sometimes in responding to demands that are coming from the White House where you basically have a 24-hour time period to respond to it.”

“We need to create a structure that will work that accommodates the need for a 24-hour turnaround,” Abbott said.

Abbott issued a monthlong shutdown of nonessential businesses last spring as the virus was bearing down on Texas. He has since relaxed restrictions, and now business operations are based on the proportion of a region’s hospital patients being treated for COVID-19. Along the way, some in his party have argued the Legislature should have had more of a say in decisions that affect so many Texans. Some Republicans blasted him for going too far with his executive orders, while many Democrats and local officials criticized him for not going far enough to curb infections.

In the interview, Abbott also addressed the high-powered push to bring casinos to Texas this session. The late GOP megadonor Sheldon Adelson’s gambling empire, Las Vegas Sands, has hired nearly 60 lobbyists for the session, hoping to pass legislation that would put the question to voters. In 2015, Abbott said he “wholeheartedly” supported the current restrictions of gambling in Texas, but in the interview Tuesday, Abbott said he wants “to hear where the members are on this.”

“One thing I want to do is, when the members get to town, I want to have the opportunity to visit with the members, get a feel for where they are, and importantly they’ll have extremely good input from their constituents,” Abbott said. “And so what we all need to hear is what is the voice and the pulse of our constituents, and one of the best ways to get that is talking directly to the members who will talk to their constituents about it.”

On another potential new revenue source, marijuana legalization, Abbott was more bearish. He said his office is looking at “additional small steps” that can be taken with regard to the drug, “but I don’t see any sweeping change [taking] place.”

As part of his State of the State speech, Abbott designated five emergency items, or items that lawmakers can vote on within the first 60 days of session. One of them is “election integrity,” though Abbott did not provide any details in his address. He elaborated in the interview, saying a “starting point” would be wide-ranging legislation from last session that would have made over two dozen changes to election practices, including making it a felony for Texans to vote when they’re ineligible or provide false information on a voter application, even if they do those things unknowingly.

Senate Bill 9, which passed in the Senate but never made it to Abbott’s desk in 2019, faced stiff opposition from voting rights groups and some county elections officials, who called it voter suppression masked as a security measure and worried that it would carry stiff criminal penalties for common, innocent mistakes.

When it came to elections, Abbott also said there is a “keen focus on mail-in ballots” and how elections were conducted last year in Harris County. Ahead of the November election, Abbott and other state GOP leaders clashed with the county’s clerk at the time, Chris Hollins, over his plan to send a mail-in ballot application to every registered voters in the county, among other proposals.

In recent months, many Republicans have called for “election integrity” measures after former President Donald Trump and many of his allies falsely alleged that the 2020 election was stolen from him and that widespread fraud occurred, culminating with Trump supporters storming the U.S. Capitol on Jan. 6 to stop the certification of the election’s results. There is no credible evidence of fraud on a level that would have affected the presidential election results.

Election security is the No. 1 legislative priority of the Republican Party of Texas, whose chairman, Allen West, plans to be an aggressive voice at the Capitol this session when it comes to the party’s eight priorities. He has also been a critic of some of Abbott’s pandemic decisions, fueling speculation that he could challenge the governor in the 2022 primary.

Abbott has kept his distance from the West-led state party, which fired a staffer on Monday after learning that he posted videos on social media of himself at the U.S. Capitol riot last month and shouting about a conspiracy theory at a Washington, D.C., pizzeria.

Asked in the interview if he had confidence in West to lead the Texas GOP, Abbott said the state party “plays a vital role” and that “all Republicans look forward to working together to make sure” they have a successful session and 2022 election. Pressed on whether he thought that was possible with West at the helm, Abbott replied, “Yeah, I feel confident with the leadership we’ve always had at the party, whether it’s the current or former leadership.”

One other emergency item that Abbott announced Monday was changing the state’s bail system. Abbott specified that he wanted lawmakers to try again on the Damon Allen Act, which he said would “keep dangerous criminals off our streets.”

Asked about the more commonly accepted conception of bail reform — tweaking the system so that poor defendants are not disproportionately kept in jail while awaiting trial — Abbott said he has made clear to lawmakers that he views that as a separate issue but is open to it. He said he would consider ensuring “that we don’t basically have a prison for the poor who don’t have the ability to get bailed out for petty crimes where they pose no danger to our communities.”