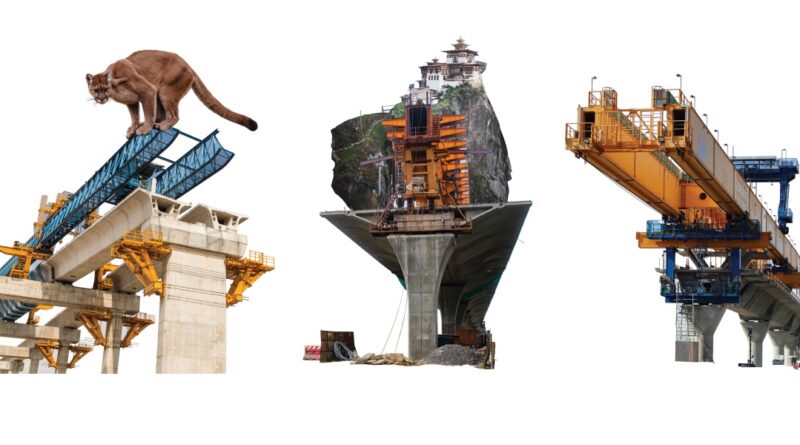 
But Banff’s wildlife crossings, like most, suffer from a sort of Horseless Carriage Syndrome, their designs circumscribed by existing infrastructure. Tunnels are often little-adapted culverts, the (usually concrete) tubes that ferry water under roads. And overpasses have generally been borrowed wholesale from roadways—they are built as if they are going to carry the weight of an 18-wheeler and then “top-dressed” with foliage, Lister says.

A scattering of experiments are starting to rethink this model. One is the Wallis Annenberg Wildlife Crossing, the $90 million wildlife bridge under construction north of Los Angeles. Designed by architect Robert Rock, it avoids the humped arch of older bridges in favor of a vast flat expanse that needs just one column to support it between mountains and across a highway traversed each day by an estimated 300,000 cars. It is the “poster child for innovation,” says Renee Callahan, executive director of ARC Solutions, a group that researches how to build better wildlife bridges. “It’s literally designed for species from mountain lions to mule deer to deer mouse,” Callahan says. “They’re designing it all the way down—to literally the mycorrhizal layer, in terms of the soil, to make sure that the soil itself has the fungal network that can support the native vegetation.”

There are many unknowns as construction starts, not least how different species will react to the sheer volume of vehicles passing beneath. The National Park Service will be monitoring activity on the bridge as well as DNA profiles of animals on either side of the freeway. Many are watching to see what will happen with the area’s population of mountain lions. Over time, inbreeding has led to genetic abnormalities, like a telltale kink in local cats’ tails. The agency predicted that the population would become extinct within decades without a crossing.

Across the US, the infrastructure bill’s $350 million falls far short of what will be needed to address the fragmentation created by the country’s 4 million miles of public roads. But there are a handful of innovations that could tip the cost-­benefit analysis by allowing crossings to be built at lower cost or in places where it was not feasible before.

Animal bridges are currently built only where there is protected land on both sides of the road, as the typical expense of constructing a concrete bridge would be hard to justify on a site that someone might develop in a few years’ time. Lighter, cheaper, modular systems could be used in places whose futures are less secure, explains Huijser: “If the adjacent lands become unsuitable for wildlife, we take it apart and you can move it.”

One candidate material for such modular systems is precast concrete. There’s also excitement about fiber-reinforced polymer (FRP), a material less dense than concrete that is made from structural fibers set in resin. FRP has been used to build foot and bike bridges in Europe and a quick-and-easy wildlife bridge in Rhenen, just south of the Gooi in the Netherlands. Currently the Federal Highway Administration does not allow it to be used in traffic infrastructure in the US, but there are growing demands for change. “These are barriers that are principally about policy and governance. They’re not about science and they’re not about technology,” says Lister.

“They know that the last thing anybody wants is for a big structure, with a lot of publicity, to get built—and then it doesn’t work.”

Designers like Lister and innovators like Callahan are vocal proponents of building wildlife bridges across the country. Road ecologists and wildlife scientists, on the other hand, remain more cautious. “They are hypercritical because they know that the last thing anybody wants is for a big structure, with a lot of publicity, to get built—and then it doesn’t work. Because everybody will come out of the woodwork and say, ‘See! Waste of time! Complete crap!’” Jones says.

But today even cautious types want to see more built. Although we may not have conducted enough research to have all the answers, it would be dangerous to take that as a signal we should stop, Huijser says. He calls such over-cautiousness a “type II error”—a false negative. In this time of mass extinction, it is as if the house is burning down and our solution so far has been to squirt a water pistol at it a few times. To conclude that water isn’t the answer would be a mistake.

Despite the challenges in Ede and elsewhere, van der Grift says, the answer is learning while building. We still need to invest in the real work of tagging, installing trail cams, and doing DNA testing and long-term population monitoring, he emphasizes. But we must first build more crossings—and the evidence we have so far says to build big and bold. “You have to realize that you almost cannot do too much,” he says. “You do what you think is necessary, study it, and then, nine out of 10 times, you will see, ‘Oh, I should have done more.’ But there’s no point in waiting until you have figured that out.”

Matthew Ponsford is a freelance reporter based in London.