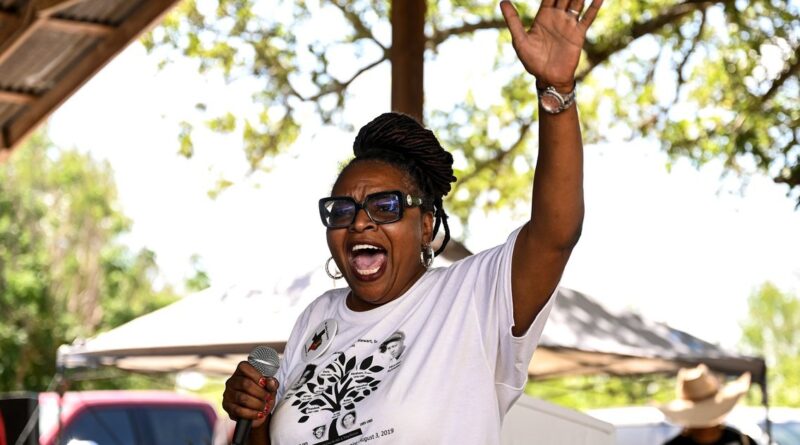 ST. JOHN COLONY — Standing under a wooden pavilion on land settled by African Americans during Reconstruction, Virginia Stewart Miller used her microphone to check the pulse of the crowd gathered to celebrate Juneteenth, asking if the dozens in attendance Saturday could hear her as she prepared to kick things off with the Black national anthem.

“I memorized it as a kid but, in getting ready for this … it meant a whole lot more to me,” Miller, wearing a white t-shirt with an image of her family tree, told the Tribune. She said she hoped her granddaughter, who was in the audience, would remember the holiday as fondly as she does. “It really just makes me remember and think about everything that our ancestors went through but also being better. Being more diligent, being more intentional about what I do for the future, what my children do for the future.”

As Miller started to belt out “Lift Ev’ry Voice and Sing” — her singing voice hoarse from rehearsal the day before — the crowd, many of whom were close relatives, joined in. The performance was the predecessor to lunch, a soul food buffet with brisket and peach cobbler at the heart. Sounds of fans could be heard blowing behind chatter and laughter as the temperature climbed toward 100 degrees.

St. John Colony’s 150th Juneteenth Celebration is just one of dozens of events — from citywide festivals and parades to family gatherings and picnics — happening across Texas this weekend in recognition of June 19, 1865, the day federal troops marched into Galveston to spread word that the last enslaved people must be freed.

This year’s celebrations are bittersweet for some.

Amid the racial reckoning that followed the protests of George Floyd’s murder by a Minneapolis police officer, the Texas Legislature passed legislation to limit how race is taught in classrooms. Texas lawmakers in 2021 also passed new restrictions on voting that disproportionately affect people of color, critics of the new law say.

But spurred by the rise in rhetoric and conservative efforts opposed to teaching the lingering impacts of slavery and racism — in part what Juneteenth symbolizes — some descendants of formerly enslaved people are using the holiday to educate younger generations.

“The black community has worked really hard at expanding the knowledge about our role in history, against the tide,” Ronald Johnson, a history professor at Baylor University in Waco, told the Tribune. “I understand the hesitancy of some people to not want to talk about slavery, not wanting to talk about Jim Crow, not wanting to talk about the rolling back of civil rights. But that is our history. And for African Americans, it is imperative that we continue to push for the expansion of our story being told — not just as a Black story, but as an American story.

The community gathers annually to celebrate Juneteenth, which descendants of the first families in St. John Colony say has always been about family. The holiday in St. John — a Texas state holiday since 1980 and recognized federally in 2021— involves dozens of vendors selling jewelry and efforts to register people to vote. On Saturday, children played in a bouncy house and went on scavenger hunts. Some adults played dominos, and all the while the older generations passed along the history of the freedmen settlement.

“It’s really to inform, to educate, and give people a sense of pride and honor, knowing that their people came from some real strong education,” Loretta Walker Hawkins, a descendant of one of the original families, said. “They knew how to buy land, form it and take care of their families, you know, so that’s what we try and instill in these young people.”

Those critical of the Texas law that bans teaching that “slavery and racism are anything other than deviations from, betrayals of, or failures to live up to, the authentic founding principles of the United States” or any lessons that make students feel uncomfortable about their race say it limits honest conversations and places instructors in difficult positions where they are unclear about what historical lessons cross the line.

Karen Kossie-Chernyshev, a history professor at Texas Southern University in Houston, said the discussions stemming from the Texas Legislature miss a bigger opportunity to teach how much progress Black Americans have made.

“Education is even more so important, not just for African Americans, but all Americans need to really sit with our history and understand the role that race has played, the stratification based on race, class, gender,” Kossie-Chernyshev said. “We have to have the space to think about that. And to look at the documents, you know, and interpret those documents. And to say what we know really happened.”

Descendant Audria Patrick hadn’t been back to St. John Colony in 20 years. But she said the opportunity to represent her family and do more research on her ancestry motivated her to return. Patrick’s father built one of the churches on the historic grounds.

The descendants of families in St. John wear their family names like badges of honor. They share stories of Juneteenth celebrations with joy, remembering playing in open fields with whatever objects they could find lying around. For some, returning to the freedmen settlement draws them back to the communal foundation, where they learned the importance of family. For others, it’s a reminder of what’s possible in the face of cruelty and opposition.

“If they don’t want to hear our story, we still have to tell our story,” Patrick, wearing a circular St. John Colony Juneteenth pin on her shirt, said. “I do think this is a form of activism. To me, it is. Because, like, nope, you’re not gonna shut us up. You don’t want us in your space. We got our own space.”

In his historical research for the Juneteenth events in St. John, Javier Wallace found out that Rev. Winn’s wife was the sister to Wallace’s great-great-great-grandfather — a revelation he doesn’t think would have been possible without diving into the history. He said the historical committee, which he’s a part of, was also able to push back on false narratives about slavery’s role in Texas.

“It cannot be disconnected because we are citizens of the state of Texas,” Wallace said. “We are the citizens of the state of Texas that were descended from these individuals who created this place, were denied citizenship, fought to have citizenship for over 100 years. And that is our story as individuals in Texas. So as we walk around trying to protect the feelings of others, nobody’s asking us about how we feel. About who is going to protect us and our feelings from that painful past and history.

Disclosure: Baylor University and Texas Southern University – Barbara Jordan-Mickey Leland School of Public Affairs have been financial supporters of The Texas Tribune, a nonprofit, nonpartisan news organization that is funded in part by donations from members, foundations and corporate sponsors. Financial supporters play no role in the Tribune’s journalism. Find a complete list of them here.

Join us Sept. 22-24 in person in downtown Austin for The Texas Tribune Festival and experience 100+ conversation events featuring big names you know and others you should from the worlds of politics, public policy, the media and tech — all curated by The Texas Tribune’s award-winning journalists. Buy tickets.