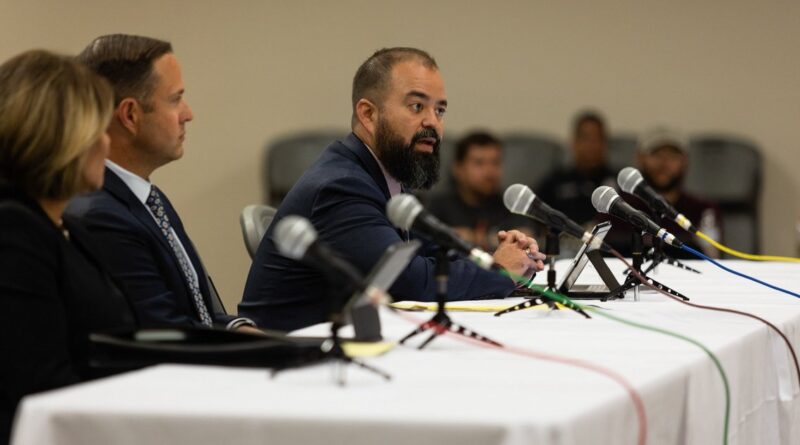 State Rep. Joe Moody sat in the auditorium of St. Luke Catholic Church in El Paso on Aug. 3, 2019, preparing for a religious retreat with a group of fellow churchgoers. That day, they were talking about community.

“A lot of that discussion was kind of, what do you do in your daily life to reflect God’s love into the community?” Moody remembers.

Then, some law enforcement members of the group started getting calls and began to leave. Moody quickly learned that a 21-year-old gunman had opened fire at a local Walmart, killing 23 people and injuring many more in a racially motivated rampage against Hispanic immigrants.

The El Paso Democrat said he went to the shooting scene and witnessed the pain of families that were waiting to find out whether they would be reunited with their loved ones.

“You don’t imagine anything like this happening,” Moody said. “But … it changes you, and the urgency it puts into your heart is different.”

Three years after the shooting in his hometown, Moody is at the center of the state’s response to yet another mass shooting: the May 24 killing of 19 students and two teachers at Robb Elementary School in Uvalde by an 18-year-old gunman, the deadliest public school shooting in Texas history.

Texas House Speaker Dade Phelan appointed Moody as vice chair of the House investigative committee on the Robb Elementary School shooting, which released its interim report in July. After much of the blame for a more than one-hour delay in confronting and killing the gunman had fallen on local police — particularly Uvalde school district police Chief Pete Arredondo — the report also criticized the inaction of hundreds of state and federal law enforcement officers who responded.

The report also gave the public an in-depth portrayal of the shooter, highlighting the red flags that surfaced in his communications with friends and online acquaintances, and how easily he was able to legally purchase the weapons and ammunition he used in the massacre.

“What that says to me as a policymaker is [if] there’s no legal impediment to doing what was done here, then there should be,” Moody said.

Moody said a guiding promise he made to the families of the victims in El Paso — to continue fighting to improve gun safety and to keep weapons out of the hands of “people that don’t need them” — has guided his work since then.

“We can’t be complacent and we have to do what we can to make people safe,” Moody said.

But after each of the mass shootings in Texas in the past five years — Sutherland Springs, Santa Fe High School, El Paso, Midland-Odessa — calls to restrict gun ownership have gone nowhere in the Republican-dominated Texas Legislature, which has instead passed laws to make carrying firearms easier in the state.

In the wake of the El Paso shooting, Gov. Greg Abbott formed the Texas Safety Commission, which held a series of roundtable discussions and recommended solutions to prevent mass shootings. The governor had organized similar roundtable discussions after the 2018 Santa Fe High School shooting — which left eight students and two adults dead — that led to a School and Firearm Safety Action Plan.

After the Santa Fe roundtable discussions, Abbott signed into law bills that would strengthen mental health initiatives and provide funding to schools for increasing security in their buildings. The School and Firearm Safety Action Plan encouraged the Legislature to “study the possibility of creating a ‘red flag’ law to identify persons who are a danger to themselves or others and who either have access to or own firearms.”

Ari Freilich, state policy director at the Giffords Law Center, a San Francisco-based group that promotes gun control, said the roundtables organized after the Santa Fe shooting seemed to suggest that future gun safety legislation might be possible. In the end, that did not pan out.

“The recommendations fell far short of what was needed to meaningfully address the rising rates of gun violence across Texas and the devastating increases in the frequency and lethality of mass shootings,” Freilich said in an email.

During the 2019 legislative session, Moody introduced a bill to create a red flag law, but it died without reaching the governor’s desk.

After the El Paso massacre, the Texas Safety Commission released the Texas Safety Action Report, which made a series of recommendations for firearm-related legislation. Abbott also issued executive orders that he said increased “law enforcement’s ability to respond to suspicious activity.”

In the 2021 legislative session, the first after the El Paso shooting, Moody introduced another red flag bill, which again failed, as well as several other gun safety measures that did not become law.

In that session, lawmakers gave gun rights advocates a big victory after Abbott signed into law House Bill 1927, which allows Texans to carry a handgun without training or a permit anywhere a gun is not otherwise prohibited.

Before his colleagues in the House voted on the permitless carry bill, a disheartened Moody rose to address them.

“One day, a tragedy will come to your community,” he said in an impassioned speech. “It’s come to many others’ community, and it’s going to come to yours, too, because we fail to be responsible to the members of our communities across the state. I pray that it doesn’t, but it is.”

Moody’s warning seemed prescient after the mass shooting in Uvalde exactly a year and a day later.

A wooden cross for comfort

Moody made his first visit to Uvalde as a member of the House Investigative Committee on June 15, carrying a special wooden rosary that was given to him by one of the members of his Saturday church group. Moody said he picked it up on the day of the El Paso shooting and has carried it with him ever since.

Moody, the sole Democrat on the three-member committee alongside Rep. Dustin Burrows, R-Lubbock, and former state Supreme Court Justice Eva Guzman, says going through the investigative files from the Uvalde shooting has been challenging because of the violence they describe. But he said they owe it to the families of the victims to separate the facts from the misinformation.

In the aftermath of the Robb Elementary shooting, Abbott and other public officials announced that they would allocate $105.5 million in state funds to mental health and school safety — with a little more than $11 million of it devoted to mental health services.

Moody calls the focus on mental health a “red herring” and said he worries about stigmatizing people with mental illness.

Mental health advocates have warned against using mental illness as a scapegoat when it comes to gun violence. “A vast majority of firearm violence is not attributed to mental illness,” the American Psychiatric Association said in a statement after the Uvalde shooting.

As Moody looks ahead to the 2023 legislative session that starts in January, Moody says he needs to remain hopeful that more can be done to prevent another mass shooting.

“I wouldn’t be going back [to the Capitol] if I didn’t have hope,” he said. “If I don’t carry that with me, then I shouldn’t be in this job. … If you’re not willing to do the difficult and do the challenging, then you need to find a different line of work.”

Disclosure: Walmart Stores Inc. has been a financial supporter of The Texas Tribune, a nonprofit, nonpartisan news organization that is funded in part by donations from members, foundations and corporate sponsors. Financial supporters play no role in the Tribune’s journalism. Find a complete list of them here.