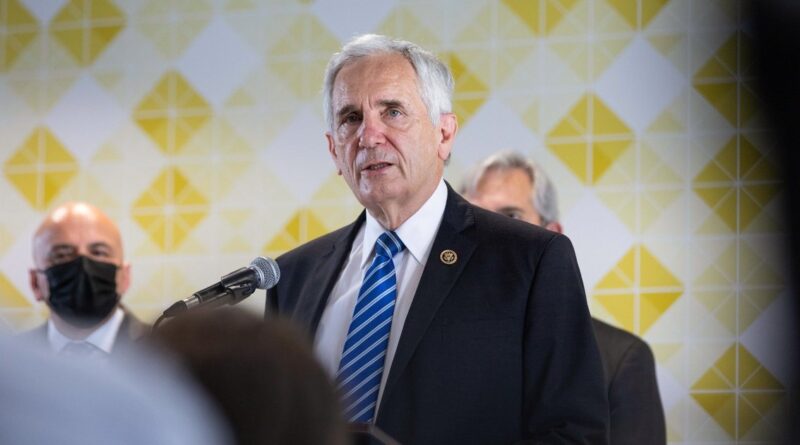 Longtime U.S. Rep. Lloyd Doggett, D-Austin, has decided to run for reelection in Texas’ 37th Congressional District, opting to vie for one of Texas’ two new congressional districts — a bright-blue seat concentrated in Austin — rather than his current district, which reaches down to San Antonio.

Doggett announced the decision Sunday in an email to supporters and then shared it in person Monday outside Bryker Woods Elementary School in Austin.

“Nobody, me included, has any entitlement to public office, but Bryker Woods does issue reports cards,” Doggett said, “and I’m ready for my neighbors to grade my service in Congress and my devotion to the families of this city.”

Doggett currently represents the 35th Congressional District, which runs from Austin down along Interstate 35 to San Antonio. The proposed 37th District is far more compact, contained almost entirely within Travis County, home to Austin. Both are currently safely Democratic districts — and likely to remain so after redistricting.

The congressional map proposal is close to reaching Gov. Greg Abbott’s desk after House and Senate negotiators hashed out their differences Sunday.

The packing of Democratic voters in the new Austin district spares several Texas GOP congressmen of having to represent parts of Austin after 2022.

“Though designed for the wrong reasons and refusing to acknowledge that 95% of the growth in Texas has been from people of color, this new plan at least relieves most Travis County residents from being forced into districts of Trump-supporting Congressmembers,” Doggett wrote in the email to supporters Sunday. “My decision also makes more likely the election of a new Hispanic member in the reconfigured District 35 for families from San Antonio to Austin, whom I will continue serving during the next critical fourteen months.”

CD-35 is set to become one in which Hispanic voters make up 48% of eligible voters, which is actually less than their share of the electorate in the CD-35 that Doggett currently represents. Its Hispanic voter population is 53%.

Doggett also survived the last round of redistricting by switching districts, changing to the 35th District, which was new at the time. It was drawn to be a Hispanic-majority district, and Doggett faced a primary against then state Rep. Joaquin Castro of San Antonio. But Castro ultimately ran for the San Antonio-based 20th Congressional District after its Democratic incumbent, Charlie Gonzalez, announced his retirement.

Doggett’s chances of reelection in the new district are high. He has served in Congress since 1995 and a built a massive campaign war chest, totaling $5.4 million as of Sept. 30.

Doggett’s decision to run in CD-37 means there will be an open seat in CD-35.

If reelected, Doggett would be approaching nearly three decades in Congress.

Speaking outside the elementary school, Doggett said he did not plan to be a “forever congressman.”

“I’ve been fortunate to represent this city for a long time, and I don’t plan to stay there,” Doggett said. “What I am doing today is submitting my job application for another two years of service.”

Doggett has a history of moving around to keep his seat. But in the historical view, a compact, Travis County-based district is a return to the past for Doggett and Austin.

“Texas’ ‘new’ 37th Congressional District is like the old 10th Congressional District, which my father represented for 31 years,” Peggy Pickle, the daughter of the late U.S. Rep. Jake Pickle, wrote to the Tribune in an email. “It’s beneficial for all the communities of Austin — the University of Texas, state and county government, high-tech, film and music industries — to be included in one congressional district. It makes for better constituent service and better influence in Washington.”

Prior to the mid-decade redistricting of 2003, Doggett represented a version of the Texas 10th Congressional District that has one of the most storied histories of U.S. House districts. For much of the 20th century, CD-10 was based in Travis County and expanded into surrounding counties. Its most famous congressman was Lyndon B. Johnson from 1937 to 1949. Prior to Doggett’s ascent in 1994, it was known as the “J.J. Pickle District,” named for Doggett’s predecessor, a prominent Democratic member of the U.S. House Ways and Means Committee and a Johnson protege.

Because of its proximity to the state Capitol and the governor’s mansion, CD-10 represented some of the most powerful people in Texas and American politics, including the Johnson family, Gov. John Connally and various statewide officials.

By the early 2000s, the 10th shrank in geographic size because of population growth and encompassed the eastern half of Travis County.

And then the Republicans went to work on it.

In 2003, Republicans carved up Austin with an aim to break up the potent Democratic vote in an increasingly liberal county. Peggy Pickle described it as slicing “up the old 10th District like pieces of bacon.”

Doggett was forced to run in a newly drawn 25th Congressional District, which included parts of southern Travis County and extended down to the Rio Grande border.

The GOP calculus at the time was that a Hispanic challenger could defeat Doggett in a primary, but he hung on both then and in the next decade when he ran in a new, 35th Congressional District that mostly included the east sides of Travis and Bexar Counties and I-35 in between.

In part, the long-term congressman has been able to scare off potential Democratic challengers with a massive amount of campaign money. His latest campaign finance reports showed Doggett sits on well over $5 million in campaign cash, a staggering sum for a House member.