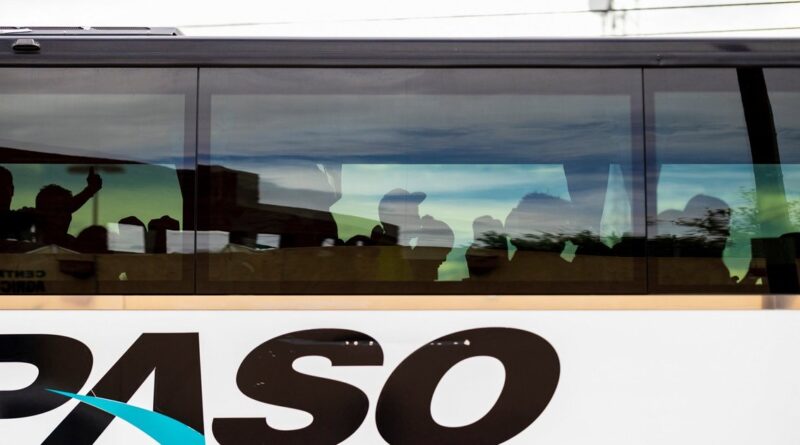 For five months, Gov. Greg Abbott bused migrants to Democrat-led cities to draw attention to the number of people arriving at the Texas border.

He began with Washington, D.C., then expanded the busing to New York and Chicago. At least 11,000 migrants have been removed from the state, by all accounts voluntarily.

But an attempt by Florida Gov. Ron DeSantis to deploy the same tactics last week took the issue to another level, when the state flew a plane to Texas, allegedly lured migrants onto the flights by promising jobs, housing and services and a free trip to Boston, and then left those migrants in Martha’s Vineyard, an island resort town about 100 miles away. Three of those migrants have now sued DeSantis in federal court.

In one way, Abbott and DeSantis are following a familiar playbook: Find ways to put immigration front and center in election season to take advantage of populist backlash. But some say the transports have brought the country’s political discourse to a new low by using migrants as props in political theater, and not merely subjects of rhetorical attack.

“To me, this is just really crass manipulation of people. It does speak to our values,” said Jim Harrington, the retired founder of the Texas Civil Rights Project who has worked on immigration issues since 1973. “The idea that you could play with people in the way he did.”

Abbott’s office said Texas played no role in the flying of migrants to Massachusetts. But it has caught similar backlash for its recent push to send migrants in buses to Vice President Kamala Harris’ home in Washington — a stunt that Harris is unlikely ever to have seen, given that the vice president’s residence is within an 80-acre scientific and military compound, the Naval Observatory.

In November, Abbott is seeking a third term, and DeSantis a second. Politicians have frequently used immigrants around election time. In 1994, California Gov. Pete Wilson ran ads depicting migrants crossing the border during his reelection campaign. More recently, Donald Trump’s successful presidential run in 2016 began with his denouncing Mexican immigrants as “criminals,” “drug dealers” and “rapists.” Abbott himself ramped up his attacks on “sanctuary cities” in 2017, the year before his first reelection campaign.

But while those efforts depicted and discussed the immigrants, the use of actual migrants themselves has disturbed scholars and observers who see it as just the latest in a series of collapsing norms that are eroding American democracy.

Donald F. Kettl, professor emeritus and former dean at the School of Public Policy at the University of Maryland, said the latest transports represent a “dramatic escalation in the use of immigrants as a political tool and a political symbol.

“One of the things that’s happened for sure is that immigrants as human beings — the notion that they have needs or problems they’re trying to escape and their aspirations to create a new home in the U.S. — has been pushed aside by the idea to create a mega symbol and use them as pawns that are being moved,” Kettl said. “It’s a truly awful way to treat human beings and it’s an effort for sure to push the needs of human beings aside to try to score political points.”

“There’s no concern in the plan for the migrants and their well-being and their welfare,” she said. “It’s, ‘how can I use these migrants to score a political point against my opponent?’”

Abbott and DeSantis have said that they want to force Democratic officials, starting with President Joe Biden, to take action. But Mercieca said that is belied by the execution of the programs without any proposed solutions.

“These aren’t about policy solutions, but instead they are about generating political spectacle. They are about creating dramatic events or ‘pseudo events’ that have to be covered,” she said. “They gotta stick it to the other side. They gotta show that they’re tough. They gotta have victory.”

Those “pseudo events” are aimed at controlling the narrative as both governors seek reelection and an opportunity to grow their name recognition, possibly in anticipation of a 2024 presidential run, Kettl said.

The polls show why that might be advantageous for Abbott. Over the summer, much of the political discourse in Texas focused on the school shooting in Uvalde and the overturning of Roe v. Wade. A recent University of Texas/Texas Politics Project poll found that more Texans trust Abbott’s 2022 challenger Beto O’Rourke on abortion issues — and they are evenly split on the issue of gun violence. On border security and immigration, on the other hand, Abbott holds a 12-percentage-point advantage.

But Mercieca also noted a change in how far politicians are willing to go to get their point across and how much the public is willing to tolerate.

“A stunt like what Abbott or DeSantis has done would have made zero sense 10 years ago, 15 years ago and 20 years ago,” she said. “That wouldn’t have resonated with a more general audience. But today’s audience loves that.”

That’s partially because cable news has become hyperpartisan, pressuring politicians to take dramatic and even extreme action to get attention.

The movement of migrants has also drawn comparisons to painful parts of U.S. history. As news of the Florida flights spread across Massachusetts, the John F. Kennedy Presidential Library published a tweet comparing the effort to the “reverse Freedom Rides” of the 1960s.

But those jobs and opportunities did not exist and instead left the Black travelers stranded away from their homes.

This week, PBS broadcast the documentary filmmaker Ken Burns’ latest project, “The U.S. and the Holocaust,” which chronicles America’s refusal to change restrictive immigration quotas to help refugees, even as millions of people fled Europe before and during the Holocaust.

Harrington said the use of migrants to score political points shows a new “callousness” in how Texans view immigrants. Just 21 years ago, a Republican-led Texas Legislature approved a law to allow undocumented youth who grew up in the state to pay in-state tuition at public universities. Following the escalation of the migrant movements this month, no Republican elected official has spoken out, nor have major business or civil leaders.

“A lot of people are sitting around talking about this and bemoaning it, but where is the leadership that helped shape and form our humane response as a democracy? Where is it?” he said. “We are so fractured right now.”