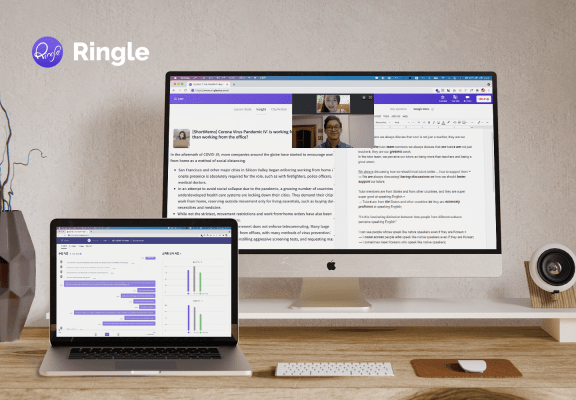 
Many of the highest-profile English tutoring platforms focus on children, including VIPKID and Magic Ears. Ringle created a niche for itself by focusing on adults first, with courses like business English and interview preparation. The South Korea-based startup announced today it has raised an $18 million Series A led by returning investor Must Asset Management, at a valuation of $90 million. Ringle is preparing to launch a program for school kids later this year, and also has plans to open offline educational spaces in South Korea and the United States.

Other participants in the round, which brings Ringle’s total raised to $20 million, include returning investors One Asset Management and MoCA Ventures, along with new backer Xolon Invest. Ringle claims its revenue has grown three times every year since it was founded in 2015, and that bookings for lessons have increased by 390% compared to the previous year.

Ringle currently has 700 tutors, who are pre-screened by the company, and 100,000 users. About 30% of its students, who learn through one-on-one live video sessions, are based outside of Korea, including in the U.S., the United Kingdom, Japan, Australia and Singapore.

Ringle’s co-founders are Seunghoon Lee and Sungpah Lee, who both earned MBAs from the Stanford University Graduate School of Business. They developed Ringle based on the challenges they faced as non-native English speakers and graduate students in the U.S. The startup was first created to serve professionals who are already established in their careers or in academia. Its students include people who have worked for companies like Google, Amazon, BCG, McKinsey and Samsung Electronics.

Ringle’s tutors are recruited from top universities and need to submit proof of education and verify their school emails. The company’s vetting process also includes a mock session with Ringle staff. Lee said applicants are asked to familiarize themselves with some of Ringle’s learning materials and lead a full lesson based on its guidance. Ringle assesses candidates on their teaching skills and ability to lead engaging discussions that also hone their students’ language skills.

Part of Ringle’s new funding is earmarked for its tech platform. It is currently developing a language diagnostics system that tracks the complexity and accuracy of students’ spoken English with researchers at KAIST (Korea Advanced Institute of Science and Technology).

The company already has an AI-based analytics system that uses speech-to-text and measures speech pacing (or words spoken per minute), the amount of filler words and range of words and expressions in lessons. It delivers feedback that allows students to compare their performance with the top 20% of Ringle users in different metrics.

The new language diagnostics system that is currently under development with KAIST will start releasing features over the next few months, including speech fluency scoring, a personalized dictionary and auto-paraphrasing suggestions.

The funding will also be used to create more original learning content, and hire for Ringle’s offices in Seoul and San Mateo, California. Ringle also plans to diversify its revenue sources by providing premium content on a subscription basis, and will launch its junior program for students aged 10 and above later this year.