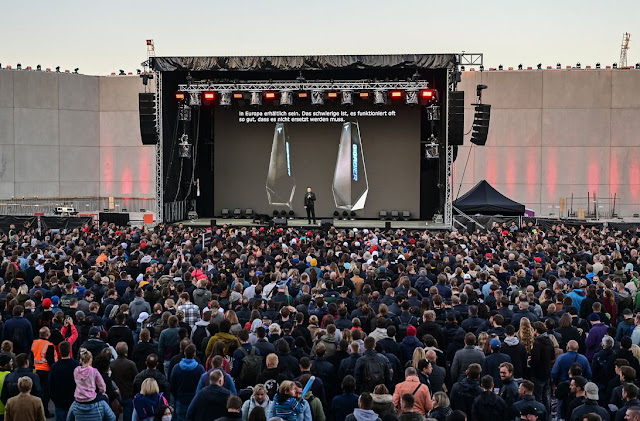 The list of weird things with Elon Musk attached to them continues to grow, and this time, it’s a beer. Specifically, it’s the Gigabeer, or Gigabier in German. What is that? We really don’t know, but it’s an adult beverage inside a container that vaguely recalls the Tesla Cybertruck. Really, it’s a little piece of celebration as Tesla prepares to (hopefully) begin production at its new Gigafactory in Berlin next month.

Musk announced the beer at a special event at the plant this past weekend and didn’t say much else beyond the fact Tesla will make it. It will likely be akin to the Tesla Tequila, in the sense of being some sort of limited-run beverage that collectors will scoop up and try to preserve. Tesla Tequila bottles, with or without the liquor inside, can sell for $1,000 these days. The bottle retailed for $250 when new.

Perhaps the Gigabeer will arrive by the end of this year to coincide with the potential production start at the new factory. When the new Gigafactory does come online, it’ll be responsible for assembling the Model Y to start, but it may also play a part in an even cheaper Tesla vehicle to come. Musk previously sounded open to a European-centric model like a Model 3 hatchback.