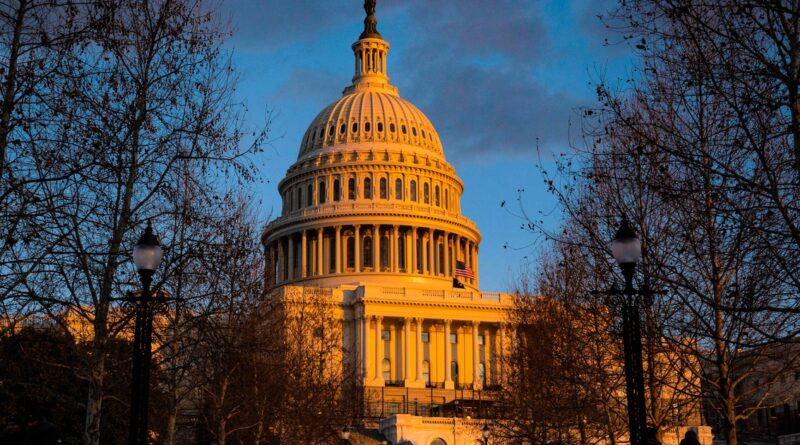 The yearlong Democratic push for federal voting rights legislation neared a futile end Wednesday night after Senate Republicans blocked an elections bill for the fifth time in six months and Democrats appeared unable to unite their caucus behind a plan to rewrite the Senate’s rules and pass it anyway.

The final clash, which has been brewing since Democrats won congressional majorities a year ago as Republican legislatures in 19 states embarked on a campaign to roll back election access, began with an evening vote to close debate on a sprawling voting rights bill. That vote, at the Senate’s traditional 60-vote margin for legislation, failed on a 51-49 vote.

Democratic leaders now plan in the coming hours to execute a maneuver to change the rules and allow the filibuster to be broken with a simple majority vote. But Democrats, with a 50-50 majority secured by Vice President Harris’ tiebreaking vote, do not have the support to execute that plan. Two Democratic senators — Joe Manchin III of West Virginia and Kyrsten Sinema of Arizona — have indicated they will not support any attempt to weaken the 60-vote rule, defending it as a tool to protect minority party rights and promote bipartisanship in American democracy.

Senate Majority Leader Charles E. Schumer, D-N.Y., and other top Democrats said they are determined to push forward with a floor confrontation regardless, even as it promised to expose bitter divisions inside their own party rather than amplify a GOP blockade that they have described as an existential threat to democracy.

“Shall American democracy in the 21st century be called a true heir to our framers’ vision — a nation where the people choose their own leaders, forge their own destiny and add to the great legacies of those who expanded the franchise before us?” Schumer said Wednesday night. “Or shall we see American democracy backslide in our time, grow feeble in the jaws of its adversaries and ultimately succumb to the cancer of voter suppression? The answer, in a large sense, could depend on how we move forward this evening.”

At a news conference Wednesday, President Joe Biden acknowledged the looming setback but said Democrats were “not out of options” and that the fight over changes to voting laws would continue to the midterm elections and beyond.

“I’ve been engaged a long time in public policy, and I don’t know many things that have been done in one fell swoop,” he said, adding, “I think you’re going to see the people [Republicans] would try to keep from being able to show up, showing up and making the sacrifice that needs to be made in order to change the law back to what it should be. But it’s going to be difficult. I make no bones about that. It’s going to be difficult.”

Republicans have shown little hesitation in continuing their opposition to the Democratic voting legislation, which combines an effort to restore portions of the 1965 Voting Rights Act that have been struck down in recent years by the Supreme Court with a broader effort to establish new national standards for federal elections, including minimum requirements for early voting, voting by mail and other methods of making it easier to vote.

Democrats contend the legislation is needed to counter changes made in several states by GOP legislatures that they argue will make voting more difficult, particularly in minority communities. Republicans have dismissed Democratic criticism of these laws as overblown and have described the legislation in Congress as a partisan power grab.

In four Senate votes held since June on various voting bills, only one Republican, Sen. Lisa Murkowski of Alaska, cast one vote on one bill to proceed with debate. Other Republicans have rallied around a position staked out early last year by Senate Minority Leader Mitch McConnell, R-Ky., holding that the federal government should have no additional role in regulating state elections, despite the Constitution’s clear reservation of a federal role in elections for federal office.

In a bid to overcome Republican opposition, Democrats coalesced Tuesday around a plan this week to modify the Senate’s debate rules only for the pending voting rights legislation. While current rules require 60 senators to vote to close debate and move to a final vote, Schumer said he will propose enforcing a two-speech-maximum rule for each senator. Once debate is fully exhausted under those terms, the Senate could move to a final vote at a simple majority threshold.

But the two holdout Democrats and scores of Republicans warned that there could be no simple exception for the pending bill and that any attempt to exempt legislation from the 60-vote rule would inevitably lead to the permanent end of the Senate filibuster as it currently exists.

Manchin confirmed his intention to oppose the rules change in a floor speech Wednesday afternoon, when he accused fellow Democrats of misrepresenting the history of the filibuster, which has evolved over the Senate’s 232-year history but has generally served to protect the rights of the minority party.

In recent decades, it has become a tool of routine legislative obstruction utilized by both parties, but Manchin argued that did not necessitate fundamentally changing the nature of the Senate along party lines. Any such move, he warned, would only exacerbate poisonous political divisions among Americans.

“I cannot support such a perilous course for this nation when elected leaders are sent to Washington to unite our country, not to divide our country,” he said. “We’re called the United States, not the divided states, and putting politics and party aside is what we’re supposed to do.”

Sinema did not speak on the floor Wednesday, but she made her position clear in a speech last week, delivered just before Biden arrived on Capitol Hill to lobby Democrats at a private Senate lunch. She sat at her desk on the Senate floor for much of Wednesday’s debate, listening to speakers of both parties.

Both Democrats’ views have remained firm as numerous other Senate Democrats have changed their views on the filibuster, backing the need for changes after defending the rule earlier in their careers — including during the Trump administration, when Republicans held unified control of the White House and Congress from 2017 to 2019.

In remarks to reporters Wednesday afternoon, McConnell cast the vote in momentous terms, while accusing Democrats of seeking to fundamentally remake the institution to secure partisan political advantage.

“I think it’s pretty safe to say this is the biggest day in the history of the Senate, because we’re dealing with the Senate as an institution,” McConnell said. “These radicals on the other side, to get their own way, are prepared to break the United States Senate by taking steps almost all of them decried as recently as a couple of years ago.”

The final push for action has included a major Atlanta address last week from Biden, a former six-term senator, who threw his support behind changing the filibuster after concluding, he said, that democracy was at critical risk.

“The United States Senate, designed to be the world’s greatest deliberative body, has been rendered a shell of its former self,” Biden said. “I believe that the threat to our democracy is so grave that we must find a way to pass these voting rights bills.”

On Wednesday, Sens. Mark Kelly of Arizona and Christopher A. Coons of Delaware became the latest Democrats to publicly back a rules change after keeping mum for months on the question. Coons, a Biden confidant, said he backed a “narrow and temporary” filibuster exception aimed at upholding fundamental rights, while Kelly, who faces reelection later this year, said his constituents “deserve a Senate that is more responsive to the challenges facing our country.”

“Protecting the vote-by-mail system used by a majority of Arizonans and getting dark money out of our elections is too important to let fall victim to Washington dysfunction,” Kelly said, outlining a position that notably breaks with Sinema, his fellow Arizona Democrat.

But Manchin and Sinema have resisted a blitz of political pressure from political organizations, civil rights groups and their own colleagues, who have all made the case that the threat to democracy posed by a spate of Republican-passed state voting restrictions outweighs the need to preserve the filibuster.

On Tuesday, for instance, a key fundraising group backing Democratic women who favor abortion rights, Emily’s List, announced it would not support Sinema in a future Democratic primary should she oppose the rules change. The NAACP also made a final appeal to Senate Democrats to support “what may be our last hope to save our democracy.”

“Democratic senators: what good is preserving a dysfunctional tradition of bipartisanship if bipartisanship cannot even preserve democracy? It is morally inconsistent to praise voting rights legislation while allowing a procedural rule to tank it,” NAACP President Derrick Johnson wrote in a letter.

Manchin, meanwhile, insisted the Democratic proposal amounted to an attempt to “break the rules to change the rules.”

Manchin added that Democrats could opt to keep the voting rights legislation on the Senate floor for days or weeks longer, working to invite amendments and build GOP support that has been elusive over months of back-channel negotiations.

“We’ve wasted a year behind the scenes,” he said. “Talking through each other, around each other, but not to each other. Let’s have the debate.”

The suggestion mystified several of Manchin’s colleagues, who said that Republicans have been uninterested in having any kind of debate on voting rights.

While defeat appeared assured, Democrats on Wednesday moved forward with a daylong final debate on the issue. Party leaders encouraged Democratic senators to remain at their desks on the Senate floor through the day as the final vote approached to emphasize the gravity of the issue. While GOP attendance was more sparse, more than a dozen Republican senators delivered floor speeches rebutting the Democrats through the day.

There were moments of strong words and pointed emotion, as well as occasional exchanges between members of opposite parties that resembled the sort of bygone, freewheeling debates that many senators say should be a more routine feature of an institution that was once deemed, in seriousness that has evolved into sarcasm, the “world’s greatest deliberative body.”

In one notable speech, Sen. Tim Scott, R-S.C., accused Democrats of peddling a “negative, false narrative of what is happening to America” by referring to the new state laws as “Jim Crow 2.0” and making comparisons to the depravities suffered by Black Americans before and during the civil rights era.

“As I keep hearing the references to Jim Crow, I ask myself how many Americans understand what Jim Crow was,” said Scott, the Senate’s only Black Republican, calling the comparison “offensive not just to me or Southern Americans, but offensive to millions of Americans who fought, bled and died for the right to vote.”

That drew a response from Cory Booker. D-N.J., a fellow Black senator, who countered that Democrats were simply dealing with the fact that “it is more difficult for the average African American to vote than the average White American.”

“Don’t lecture me about Jim Crow,” he later said. “I know this is not 1965. That’s what makes me so outraged — it’s 2022 and they’re blatantly removing more polling places from the counties where Blacks and Latinos are overrepresented. I’m not making that up. That is a fact.”

Felicia Sonmez contributed to this report.