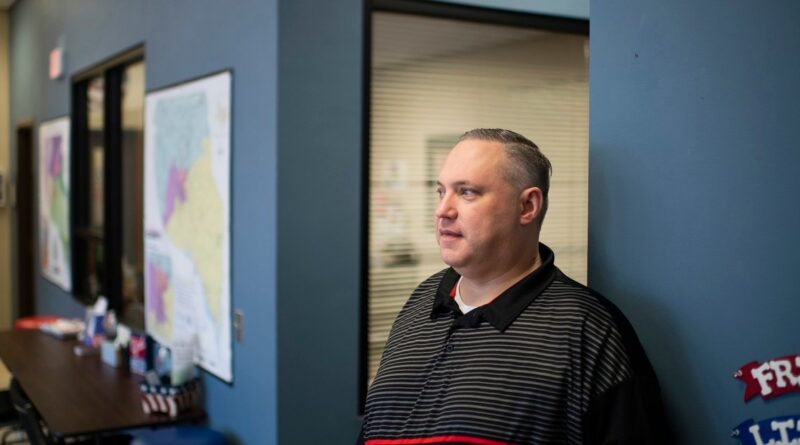 So has his stress.

First came a shift toward digital voting records, along with new state legislation that created more duties for elections officials. Then, accusations of foreign interference in the 2016 presidential race stoked the public’s fear about election integrity. And conspiracy theories about voter fraud in the 2020 presidential election have led to heightened scrutiny.

Although election deniers at one point concentrated their efforts in states like Arizona and Georgia, supporters of former President Donald Trump have since sent a barrage of public information requests to elections offices nationwide, including those in the smallest and reddest Texas counties, where Trump won handsomely.

What you can expect from our elections coverage

So on top of fulfilling their normal job duties, such as preparing ballots and updating polling information, officials are fielding questions from concerned voters. The increased demands have left some workers burned out. According to the secretary of state’s office, 30% of Texas elections workers have left their jobs since 2020. In one county, the entire elections administrator’s office resigned.

“There’s just more and more to do,” Stallings said. “Which is fine, but it’s when there’s stuff we aren’t prepared for — that’s what kind of turns everyone into a panic.”

In the weeks leading up to an election, Stallings’ East Texas office phone is always ringing. He puts in 12- to 16-hour days six or seven days a week to make sure everything runs smoothly.

Lately, his days are even longer, as he’s hustling to respond to emails from activists across the country — Los Angeles, New York, New Jersey — who are asking for ballot images from November 2020.

“Answering emails can just eat up a big part of your day,” Stallings said. He and his colleagues are usually doing “customer service” until 5 p.m., at which point they can finally start to work on administrative and planning duties.

About 80 miles south in Jasper, County Clerk Holly Thomas will administer her first election in November. Since the county does not have a singular elections office, her team runs the election while the tax assessor’s office handles registration.

Thomas is anxious as she tries to keep up with a growing list of responsibilities and public demands. On top of her normal duties, she meets with members of the public who visit her office and ask to inspect voting machines, see where ballots are stored or dissect Election Day procedures.

“One person is particularly persistent,” Thomas said. “He’s wanting to know why it’s this way or why it’s that way.”

“Some of these requests are being fielded on the backs of unfounded doubts and fears — that is problematic,” said Chris Davis, the elections administrator. “But our job as election officers is to peel back that curtain and to listen to folks with their concerns.”

The county’s elections administrator, Heider Garcia, has been the target of vitriolic attacks on rightwing social media sites. Garcia worked for election technology company Smartmatic before moving to Texas, and rightwing activists have accused him of facilitating voter fraud in the Philippines when he worked for Smartmatic.

Garcia said the allegations are false, and in testimony submitted to a U.S. Senate Committee, he shared screenshots of the messages he received and recounted an incident in which his home address was posted publicly.

“Can you imagine the level of stress this put on us?” Garcia wrote. “I could not sleep that night, I just sat in the living room, until around 3:00 a.m., just waiting to see if anyone had read this and decided to act on it.”

The nonbinding opinion has left some counties wondering how to handle public information requests they will likely receive following the November election.

“How do we handle a request for information that we are still not sure, by reading the law, can be released?” Davis asked.

Texas has some of the most restrictive voting laws in the country. And after the 2020 presidential election, Texas was one of 18 states to pass even more restrictive laws. Texas’ sweeping voting legislation, often referred to as Senate Bill 1, was championed by Republicans and signed into law by Gov. Greg Abbott last fall. It took effect in December.

The law includes a number of changes: a ban on drive-thru voting and 24-hour voting sites, increased penalties for voting crimes, more protections for poll watchers and new voter assistance rules. The law also added identification requirements for voting by mail, requiring voters to provide their driver’s license number or Social Security number on both their application and ballot.

When that law went into effect, elections administrators had just a few months to parse through the new language and understand what they needed to do in order to comply. The law was also the subject of multiple lawsuits, including one from the U.S. Department of Justice.

In March, thousands of Texans who voted under the new law had their ballots rejected because they did not meet the new, stricter voter identification laws.

Those laws also piled on more labor for election workers, who must individually process each vote-by-mail application and ballot and determine whether the voter meets the strict identification requirements. In some cases, election workers said they had to call voters to have them verify information.

Stallings said his team made more than 100 calls to voters who left off information on their vote-by-mail application.

Deborah Miller, who has worked elections for more than four decades in Nacogdoches County, said the mail-in ballots are still poorly designed, causing voters to forget to include certain required information that election workers must then try to obtain through follow-up phone calls.

Election officials are trying to provide clearer instructions to avoid these hassles. But with higher expected turnout this November, there may be a learning curve.

“We anticipate seeing people voting by mail for the first time since the new legislation,” said Davis, whose county experienced an 11.5% rejection rate in the March primary. “We’re hoping to avoid such a large rejection again.”

Tarrant County’s Garcia said despite the increasing tension, his belief in public service has kept him working as an elections administrator, a job he views as imperative to maintaining a functional democracy.

“It’s not winning a Super Bowl or being a movie star,” Garcia said. “It’s a quiet role — or at least it used to be — but a very important one.”

As for Stallings, he isn’t sure how many more years he’ll be working elections in Nacogdoches County.

“At this point, I’m kind of evaluating things on a year-by-year basis because the field of elections continues to become more tense each year,” Stallings said. “I don’t expect that will stop anytime soon.”

When he started, he had recently graduated from Stephen F. Austin University with a degree in marketing and was working as a DJ on the weekends. He needed something more stable and stumbled across an opening in the elections administrator’s office.

Twenty years later he’s still there, thanks to his faith and the community, he said.

“I think if you take this job, then you owe it to the public to do everything you can to deliver a good election for them, even if it gets really difficult.”

Disclosure: The Texas secretary of state has been a financial supporter of The Texas Tribune, a nonprofit, nonpartisan news organization that is funded in part by donations from members, foundations and corporate sponsors. Financial supporters play no role in the Tribune’s journalism. Find a complete list of them here.