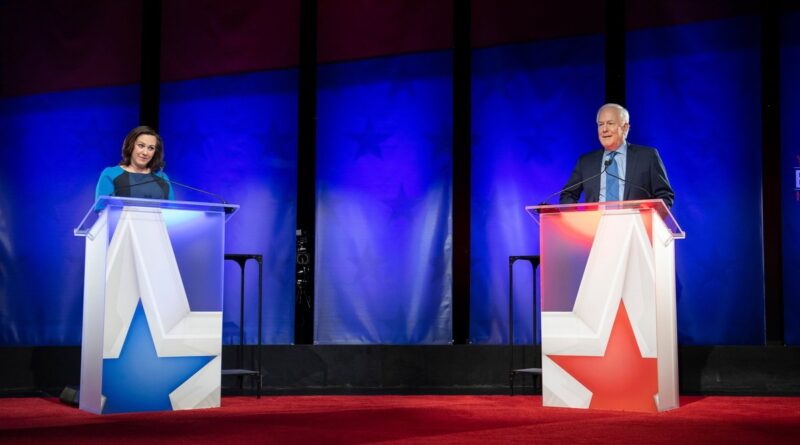 U.S. Sen. John Cornyn, R-Texas, and his Democratic opponent, MJ Hegar, butted heads Friday evening in a debate over a host of timely issues — the coronavirus pandemic, race and policing, and the U.S. Supreme Court.

As the two appeared together in Austin, Cornyn repeatedly bashed Hegar as a puppet of Democratic leaders in Washington, D.C., suggesting her views are too liberal for Texas. She in turn challenged him to train his attacks on her and argued he has lost touch with the state after 18 years in the Senate.

Cornyn stuck to his efforts to yoke Hegar to U.S. Senate Minority Leader Chuck Schumer and House Speaker Nancy Pelosi, warning they want to “make Texas more like California and New York.” He argued “respect is on the ballot” — respect for Medicare recipients, energy workers and law enforcement officials who he said would be hurt by national Democratic policies.

“Hi, I’m MJ Hegar, I’m a Purple Heart combat veteran and a working mom of two, and I am your opponent,” Hegar told Cornyn at one point. “I am the person you’re running against, as inconvenient as that is for you. It’s my ideas and my support in this state that you’re going to have to face in this election.”

Have you run into hurdles or problems while trying to vote in Texas? We want your help in reporting on those challenges. Tell The Texas Tribune your voting story.

The debate covered several issues that have dominated headlines in recent months. On the pandemic, Cornyn touted the early coronavirus relief package that he supported in Congress and lamented gridlock over more recent proposals, while Hegar suggested it is “time for him to step aside” and let people like her negotiate aid.

Both candidates were asked if they would support another “national lockdown” if there is another coronavirus surge and scientists recommend such a move. Cornyn said he does not “believe that we need any lockdowns” going forward, citing damage to the economy and emphasizing personal responsibility. Hegar responded by suggesting Cornyn was giving short shrift to science and saying, “Yes, I think we need to partner with public health experts.”

Asked if they support a national mask mandate, Cornyn said he did not, saying the United States — as well as Texas — is a “big, diverse place.”

“We don’t need the government to fill the void that we should fill ourselves by acting responsibly at the local level to keep each other safe and to get this economy growing again,” Cornyn said.

Hegar did not give as precise of an answer but agreed that “different parts of Texas are different” and called for a “national strategy that takes science and objective metrics into consideration.”

A moderator asked Cornyn and Hegar to raise their hands if they would get a coronavirus vaccine once it is available. Both raised their hands, though as he did, Cornyn said he would “eventually get it, but not first in line.” Hegar said she understood there is reason to be concerned about the “politicization of science” in the Trump administration but voiced faith in the Food and Drug Administration and Centers for Disease Control and Prevention to deliver a vaccine.

When it came to the Supreme Court, the two rehashed familiar arguments over whether Republicans were being hypocritical by rushing through President Donald Trump’s latest associate justice nominee, Judge Amy Coney Barrett, so close to an election. But they also elaborated on some ancillary issues, including court packing and term limits for Supreme Court justices.

Hegar had already said she was not for adding justices to the Supreme Court “at this point,” but the moderators pressed her to say how she would vote if she were her party’s deciding vote.

“I think it would depend on the way the arguments were presented to me,” Hegar said. “Right now the only arguments I’m hearing are how it would benefit one party over another.

Also on court reform, Hegar has advocated for term limits for Supreme Court justices. Asked for his thoughts on the idea, Cornyn expressed openness.

“I think that’s something we should talk about because unfortunately too many people now see judges as making policy from the bench,” Cornyn said, adding that the idea is “a legitimate subject for discussion.”

On another issue that has been front and center for months — law enforcement — the two clashed most bitterly when Cornyn suggested Hegar wants to “defund the police.” The term means different things to different people, but anti-police brutality activists have generally used it to describe cutting police budgets or redirecting funds to social services.

“He keeps lying about me,” Hegar said. “I don’t support defunding the police. I’m not sure how many times I need to say that.”

In a new front against Hegar, Cornyn pointed to her support for the Campaign Zero platform, which aims to end police brutality in America. Cornyn’s campaign cited a July version of the website for a Campaign Zero project called 8 Can’t Wait that calls to “fully defund police.” That phrase is no longer on the 8 Can’t Wait website.

Cornyn said Campaign Zero also wants to “legalize things like prostitution.” The group includes prostitution among the nonviolent offenses for which it wants to “decriminalize … or de-prioritize” enforcement.

“For Campaign Zero, I have not seen that as part of their platform, and maybe their platform has changed, but if you go back and look at what I’ve said I support — I said I supported things like the things set forward in Campaign Zero when they were talking about community policing and community oversight and body cameras and police officers representative of the communities that they’re policing,” Hegar said. “He can’t win against my actual positions. He has to misattribute them to me.”

Outside of the recent major issues that animated the debate, Cornyn and Hegar continued to show contrast. Cornyn said he supported forming a commission to study changing the name of Fort Hood — named after a Confederate general — while Hegar backed renaming the military base outright. Asked about marijuana decriminalization, Cornyn said he wanted to see more research about the drug’s impact on young people’s brains, while Hegar flatly said she supported decriminalization.

There was also ample sparring over the energy industry, pivotal to oil-rich Texas. After Hegar talked about securing energy jobs for the future, Cornyn shot back: “If MJ’s worried about jobs, then she would not be an advocating a carbon tax that would destroy the jobs of hundreds of thousands of workers out in West Texas and around the nation.”

Hegar disputed that she has pushed for a carbon tax but was cut off by a moderator while seeking to elaborate. During a July candidate forum, Hegar was asked about a carbon tax and said, “I stand with the League of Conservation Voters and the Sierra Club who support it but understand that it’s not a silver bullet, that we actually do need to be taking a more holistic approach.”

Perhaps most notably on energy, Hegar said she does not support a ban on fracking, a question she did not respond to as decisively while she was running for her party’s nomination. “I do support investment in clean, renewable energy that gets us to a place where we don’t need fracking,” she added.

In another throwback to the Democratic nominating process, the moderators showed Hegar a Wednesday quote from her runoff opponent, state Sen. Royce West, saying she has “not called me to ask for my support.” Hegar replied that it was not her style to pursue such endorsements.

“A lot of people express frustration that I don’t engage in politics as usual,” Hegar said. “Personal endorsements tend to come with quid pro quo that I believe are a big part of what’s broken in politics.”

The debate, which was at the Bullock Texas State History Museum, was the first — and potentially only — in the race. Hegar has pushed for two more debates, and while Cornyn has said he is open to further debates, they have not agreed on any yet.

The debate came four days before early voting begins for the Nov. 3 election.

Disclosure: Bullock Texas State History Museum has been a financial supporter of The Texas Tribune, a nonprofit, nonpartisan news organization that is funded in part by donations from members, foundations and corporate sponsors. Financial supporters play no role in the Tribune’s journalism. Find a complete list of them here.