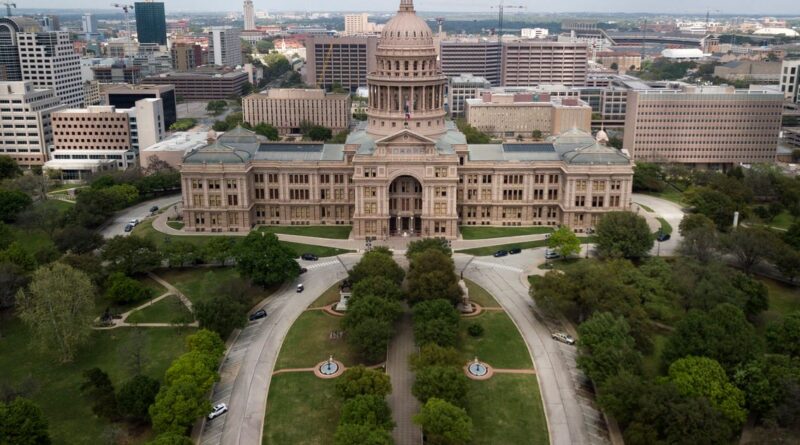 This story is being updated.

Texas House and Senate leaders on Wednesday released their respective chambers’ new preliminary state budget bills for the 2024-25 biennium, with each proposing to shell out an unprecedented $130.1 billion in general revenue at a time when the state is awash in more cash than the state constitution will allow lawmakers to spend.

The proposals, which are similar in totals but differ in some of the details, appear to leave on the table more than $50 billion in available funds at a time when the state has a total of $188.2 billion in funds available for spending over the next cycle — including a historic $32.7 billion cash balance.

Both propose to spend nearly $289 billion in state and federal funds. Neither bill busts the state’s statutory or constitutional spending limit, budget leaders said, nor do they appear to dip into the state’s rainy day fund.

The House and Senate bills both include $15 billion for property tax relief, $1.8 billion for state employee pay raises and $4.6 billion for the governor’s border security program, Operation Lone Star.

The proposals, each of them 1,033 pages, were filed early Wednesday by Huffman and House Appropriations Chair Greg Bonnen.

“We must prioritize spending that will keep Texas the nation’s economic powerhouse,” Lt. Gov. Dan Patrick said in a statement released on Wednesday. “It is also imperative that we save a sizable portion of the money for the future. Our conservative policy is to never spend all the money because you never know what challenges or opportunities lie ahead. Our steady-handed conservative approach to budgeting puts our state on excellent footing heading into the next biennium and beyond. I look forward to the legislature’s final product.”

The proposed pay raises for state employees earned applause from a group that advocates for those workers, 22% of whom left their jobs last year and who, as a group, have not seen a general pay raise since 2014, said Texas Public Employees Association Executive Director Ann Bishop.

“The proposed pay raise for state workers is welcome news. We fully support increasing salaries by 5 percent for each of the next two years, and we thank legislative leaders for their commitment to all Texans who serve the public and keep our state running daily,” Bishop said.

Last week, the state comptroller projected the state would receive at least $108 billion in federal funds, $68 billion in dedicated state revenue from fees and other sources, and $165 billion in general revenue for lawmakers to use during the next biennium.

State leaders learned last week that lawmakers would be convening their 140-day session with a treasury balance higher than the budgets of nearly half the states in the U.S. — even as the nation faces a potential recession. The 88th Texas Legislature convened on Jan. 10. Passing a balanced budget is its only constitutional obligation during the session.

Last week, Texas Comptroller Glenn Hegar said in his biennial revenue estimate that with the cash surplus and 5.7% growth in general revenue in 2024-25, lawmakers would have an unprecedented $188.2 billion available for general spending — a historic 26.3% increase from the current biennium.

The House bill appears to take no steps to tap into the state’s Economic Stabilization Fund, known as the rainy day fund, which is expected to hit nearly $14 billion before the end of the current biennium. With expected transfers and continued revenues, it is likely to surpass its constitutional balance limit of $26.4 billion in the next three years for the first time since it was created in 1988, Hegar said.

Among lawmakers’ biggest budgeting challenges is that state law and the Texas Constitution limit the amount that tax spending can grow between sessions.

But some of the same Texans whose record tax payments helped put the state in such a positive position are themselves struggling to recover from the COVID-19 pandemic’s economic fallout — increasing pressure on lawmakers to use the extra cash to help make ends meet.

State leaders are pushing property tax relief and infrastructure upgrades among their biggest ambitions this session, but the requests by lawmakers and state agencies far exceed the amount of cash available for the next budget, as they often do at the start of a cycle.

Someone always leaves with less money than they asked for.

Meanwhile, as inflation soars and property taxes skyrocket, schools and rural hospitals are facing closures, state employees are quitting in droves, the power grid is vulnerable, water problems are rising, youth prisons are on the brink of collapse and inflation is pushing many residents and state agencies past their breaking points — along with a host of other challenges across the state.

“If you count up all of the ideas, all the money — the $32.7 [billion] — is spent over like five times,” Hegar said in a Texas Tribune interview last week. “There’s just a lot of requests. … Some ideas are better than others. So they are going to have to prioritize.”

Requests by agencies for new money alone — for everything from staff raises to a new law enforcement training center — total more than $15 billion in general revenue. And some of the expected appeals for cash, like new money for child mental health programs, haven’t shown up yet in those legislative appropriations requests.

State budget officials have set the limit at a 12.3% increase based on personal income growth of Texans, population growth and inflation adjustment. That number could change as spending is adjusted in the current biennium.

Neither bill draft busts the spending limits. Several funds are exempt from the caps, and legislation could be filed later that would further shift dollars around.

But if lawmakers decide they need to do that, there are several ways around the caps.

If the money is spent with the approval of voters in a constitutional election, then it is exempt from the spending limit. Reducing state-collected taxes — like sales and franchise — or reducing property taxes could also sidestep the limits.

And short of any of that, the lawmakers can simply take a vote — a political risk for some — to bust the spending caps.

The proposals offer a first glimpse into where the chambers may be headed in funding the business of Texas.

The largest percentage increase would go to the troubled Juvenile Justice Department, whose budget would swell by 56% to $1 billion. This would allow for salary increases, adjusted funding for local juvenile justice systems and the construction of new state-run youth lockups.

Last year, The Texas Tribune reported that children were locked alone in cells for up to 23 hours, forced to use water bottles and food trays as toilets, in large part due to short staffing in the largely rural prisons. Lawmakers suggested during the agency’s decennial review to build new lockups in urban areas that could specialize in things like mental health care. Other advocates, including youth activists, have urged for the closing of all youth prisons and funding more local programs and services to tackle and prevent crime committed by children.

The House’s budget would also cement pay raises for adult prison officers that went into effect after the last budget was set. Understaffing in adult prisons has also had disastrous consequences, including being a major factor in a prison bus escape last year that led to a family’s massacre.

House leaders recommended spending $4.6 billion on border security funding spread out over 13 different state agencies. That’s an increase on the $4.4 billion the state spent on the issue over the last budget period, which includes $3 billion in appropriations and $1 billion in transfers to keep the efforts going after Gov. Greg Abbott ramped up the number of National Guard troops sent to the border in fall 2021.

The Texas Military Department would see a $613 million increase for Operation Lone Star, Abbott’s highly touted border security mission. That would include a $73 million increase to raise the per diem pay for troops sent to the mission. Troops have complained about poor pay on the mission, creating a black eye for Abbott’s pet border security effort.

DPS would see a 23% increase in its funding for border security, amounting to $226.9 million. That money would help pay for 650 new state troopers and give salary increases to existing troopers.

The money given to the governor’s office would be used for the transportation of migrants who are caught crossing the border, funding processing centers for the migrants and paying for a state-funded border wall and fencing.

In the first legislative session after the overturn of Roe v. Wade, the state House is proposing a $160.4 million increase in funding for women’s health programs.

The proposed allocation for these services — which includes family planning, breast and cervical cancer treatment and Healthy Texas Women, which is the state’s main women’s health program — is $547.2 million, which many advocates say is insufficient in a state that’s navigating a near-total abortion ban while battling a maternal mortality crisis.

Included in that proposed increase is an additional $22 million for the Alternatives to Abortion program, which funds crisis pregnancy centers and other anti-abortion programs. That program, widely touted by Republicans as a response to the state’s new abortion restrictions, lacks significant data detailing program expenditures, as the Tribune has reported.

Both chambers propose additional funding for higher education that is contingent on lawmakers passing legislation this session to support it. That includes $2.5 billion toward a new higher education endowment to support public universities that do not receive money from the Permanent University Fund, a multibillion-dollar endowment that supports the University of Texas and Texas A&M University systems.

Both chambers also include $650 million to support an overhaul of the state’s community college finance system, which is also contingent on legislation.

Disclosure: Texas A&M University, Texas Comptroller of Public Accounts and Texas A&M University System have been financial supporters of The Texas Tribune, a nonprofit, nonpartisan news organization that is funded in part by donations from members, foundations and corporate sponsors. Financial supporters play no role in the Tribune’s journalism. Find a complete list of them here.