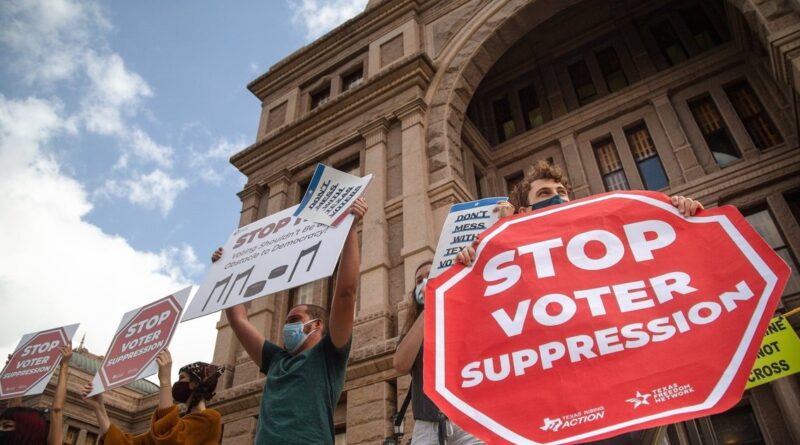 Emerging from closed-door negotiations between the Texas House and Senate, a GOP priority bill to enact new restrictions on voting has swelled beyond what each chamber originally passed to limit local control of elections and curtail voting options, and now includes even more voting law changes.

Worked out by a conference committee after the two chambers passed substantially different pieces of legislation, the final version of Senate Bill 7 takes from both iterations to cut back early voting hours, ban drive-thru voting, further clamp down on voting-by-mail rules and enhance access for partisan poll watchers. It also now includes various additional rule changes that weren’t part of each chamber’s previous debate on the bill, adding new identification requirements for mail-in ballots. Lawmakers are expected to formally sign off on the agreement in the next day and send it to Gov. Greg Abbott for his signature before it becomes law.

The final bill keeps in its crosshairs initiatives used by Harris County during last fall’s general election — such as a day of 24-hour early voting and voting sites that allowed voters to cast ballots from their cars — that proved particularly popular among voters of color. But the legislation also blocks local efforts to expand voting options across the state and ultimately touches nearly the entire voting process from early voting to vote counting.

SB 7 has been at the legislative forefront as the 2021 Texas Legislature eagerly joined in Republican efforts across the nation to enact sweeping changes to voting laws in the name of “election integrity,” although there is little to no evidence of widespread fraud. Earlier in the legislative session, Abbott conceded at a related press conference that he was unaware of instances of fraud that had upended an election in 2020. And one of the state’s top election officials told House lawmakers at an early committee hearing that “Texas had an election that was smooth and secure.”

Cajoling over the ways in which Texas voters’ access to the ballot box could narrow under proposed restrictions played out in lengthy public hearings, protracted floor debates, chaotic committee action and middle-of-the-night votes in both the Senate and House where Republican majorities advanced SB 7.

The bill has been negotiated over the last week out of the public eye after the House slimmed down the bill and swapped out all of the Senate’s proposals with language from a different House bill that was narrower in scope. But the final version of SB 7 ultimately brought back many proposals from the Senate’s more expansive version, including the ban on drive-thru voting.

The legislation requires more counties to offer at least 12 hours of early voting each weekday of the last week of early voting, but sets a new window of 6 a.m. to 9 p.m. for voting. This would directly preempt Harris County’s 24-hour voting, which it planned to keep for future elections. It would also slightly shorten the extra hours other large counties offered in the last election by keeping their polling places open until 10 p.m. — three hours past the usual 7 p.m. closing time — for at least a few days.

The bill also sets a new window for early voting on Sundays, limiting it from 1 to 9 p.m.

Counties would also be prohibited from using public funds “to facilitate” the unsolicited distribution of ballot applications by third parties, which would keep them from also providing applications to local groups helping to get out the vote. Political parties would still be free to send unsolicited applications on their own dime — a practice regularly employed by both Republicans and Democrats.

The final version of the bill further tightens voting-by-mail rules by establishing a new identification requirement for voters requesting a ballot to provide their driver’s license number or the last four digits of their Social Security number, if they have one. That language comes from separate Republican bills that failed to pass on their own.

Voters will also be required to include that information on the return envelopes containing their ballots for their votes to be counted.

In a state with tight eligibility rules for voting by mail, the bill also further heightens the threshold for who can qualify based on a disability. Current law allows voters to qualify if they have a sickness or physical condition that prevents them from voting in person without the “likelihood of needing personal assistance or of injuring the voter’s health.” The bill sets a higher standard by requiring a voter to be certain they will “not be capable” of voting in person based on their condition and sets four specific categories a voter must choose from to qualify based on a disability — illness, injury, medical confinement ordered by a medical professional and mental or physical disability.

Beyond its new restrictions on voting rules, SB 7 expands the freedoms of partisan poll watchers. Currently, poll watchers are entitled to sit or stand “conveniently near” election workers. SB 7 would entitle them to be “near enough to see and hear” the election activity. The bill also adds language to the Texas Election Code to allow them “free movement” within a polling place, except for being present at a voting station when a voter is filling out a ballot.

Provisions dropped by the conference committee include a controversial measure that would’ve allowed poll watchers to record voters receiving assistance filling out their ballots if the poll watcher “reasonably believes” the help is unlawful. That change had raised particular concerns about the possible intimidation of voters who speak languages other than English and voters with disabilities who would be more likely to receive help to vote.

SB 7 progressed without any support from Democrats and facing opposition from local officials, voter advocacy groups, some members of the business community and civil rights organizations with histories of fighting laws that could harm voters of color. Their criticism of the legislation has been rooted in its detrimental effect on access, particularly for marginalized voters, and the possibility it could violate federal safeguards for voters of color.

Aligning it with Abbott’s designated legislative priorities, Republicans have presented it as an “election integrity” measure. Although there were no major incidents during the 2020 election, they’ve also argued SB 7 is aimed at standardizing elections after counties — namely Harris County — adopted various initiatives to make voting easier during the pandemic election last fall.

Despite their arguments for standardization, the legislation originally included a proposal to regulate the distribution of polling places only in the state’s largest counties — diverse, urban counties largely under Democratic control — under a formula that would have led to a significant drop in voting sites in largely Democratic areas, with voting options curtailed most in areas with higher shares of voters of color.

The final version of the bill ultimately left out that provision.

The conference committee’s work was made public the morning after state Sen. Bryan Hughes and state Rep. Briscoe Cain announced in a joint statement Friday evening that they had come to an agreement on the final version of the legislation. That announcement — posted to both of the Republicans’ Twitter accounts and sent out in a press release — was met by confusion among Democrats on the committee who took to Twitter to indicate they had not been included in at least a part of the deliberations.

State Sen. Beverly Powell, D-Burleson, said she had not been provided “any details regarding this bill” despite being appointed to the conference committee. In the House, state Rep. Terry Canales, D-Edinburg, called it “egregious” that the Democrats on the committee hadn’t seen the formal draft of the final version of SB 7 despite Republicans’ announcement about an agreement on the bill between the chambers.

Soon after, Canales said he has been “advised” that the announcement “was prematurely released.” By then, Cain had deleted his post on Twitter about the agreement. Hughes’ post remained online.