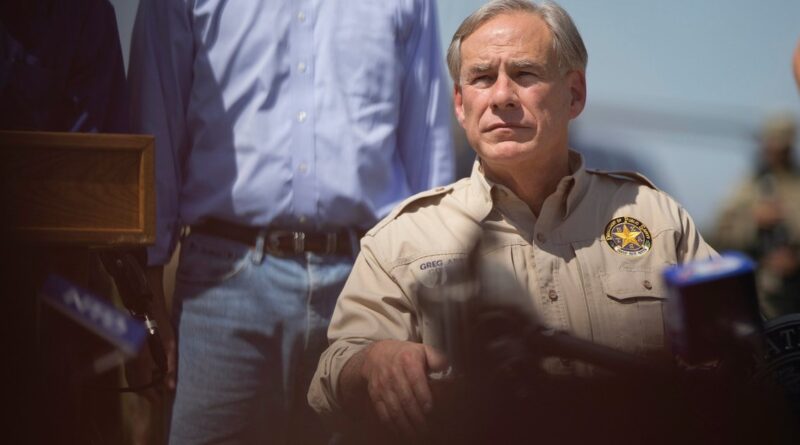 Gov. Greg Abbott tweeted a video Wednesday of the state’s latest attempt to secure the Texas-Mexico border: about 20 shipping containers lined up along the riverbank next to the international bridge that connects Eagle Pass with Mexico. Behind the containers, the images showed a fleet of Department of Public Safety patrol cars and dozens of officers walking around.

Abbott described it as a “steel wall” designed “to protect communities & property owners.”

Abbott had touted the idea of using shipping containers at the border on Oct. 28 when he was a guest on a Fox News program and said that starting that day the National Guard and DPS began placing containers at potential migrant crossing points “to serve as a blockade to prevent [migrants] from coming across the border.”

Abbott, who is up for reelection next year, has made immigration enforcement a priority for his administration, pushing an agenda that includes building more barriers along the Texas-Mexico border, directing troopers to arrest migrants crossing the Rio Grande on state charges, deploying the National Guard to different parts of the border and suing the Biden administration for what the governor has described as President Joe Biden’s open-border policies.

The shipping containers are the latest technique the state has deployed to halt migrants at the border. In September, DPS troopers created a mileslong wall of patrol vehicles along the riverbank in Del Rio after more than 15,000 asylum-seeking migrants, most of them from Haiti and other parts of Latin America, gathered under the international bridge there.

Abbott credited the “steel wall” of vehicles with stopping the migrants.

The Texas Military Department, DPS and Abbott’s spokesperson did not answer specific questions about the containers. DPS spokesperson Ericka Miller said, “The department does not discuss operational specifics; however, we can tell you we continuously monitor the situation along the border in order to make real-time decisions and adjust our operations as necessary.”

Miller also said part of the operation, called Steel Curtain, will include placing “concertina wire – as well as personnel and equipment along the border in order to block and repel criminal activity and stop violations of state law.”

Currently, there is a worldwide shortage of shipping containers because the pandemic-related shutdowns slowed down the movement of freight.

Have you ever found yourself developing an interest in learning the Chinese? Well, you should be very thankful because Chinese

Besides Beauty, There Are More An Interview Of CEO Of Shecy Pearls