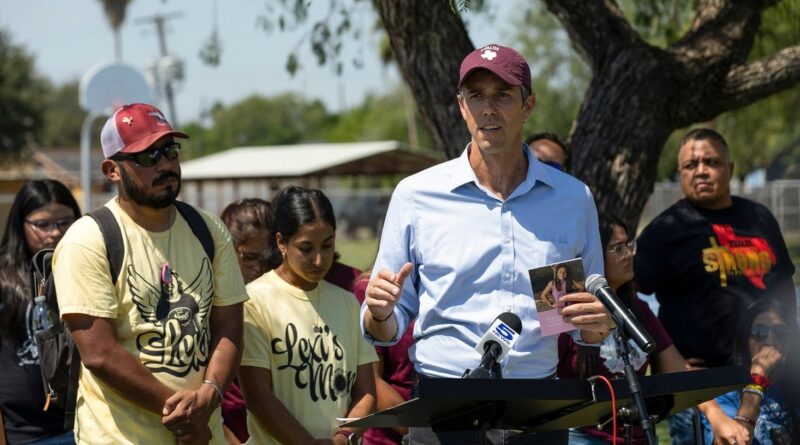 EDINBURG — Hours ahead of the only planned gubernatorial debate of the election cycle, the families of Uvalde school shooting victims threw their support behind Democrat Beto O’Rourke, saying in a news conference that incumbent Gov. Greg Abbott, a Republican, had not taken meaningful enough action on gun control measures following the deaths of 19 schoolchildren and two teachers.

“I’m speaking directly to moms when I say our babies’ lives are on the ballot,” said Kimberly Rubio, the mother of 10-year-old Alexandria “Lexi” Rubio who was killed during the school shooting. “It happened to me, it can happen to you. And this pain, it’ll bring you to your knees.”

She faulted Abbott for not taking action to restrict access to guns after meeting with family members who asked him to call a special session to raise the age for buying an assault rifle from 18 to 21. Abbott has said since that he believes such a change in the law would be unconstitutional following recent court rulings. However other states, like Florida, have such laws. Rubio blasted Abbott for expanding gun rights in the state even as mass shootings have rocked the state in recent years.

“Had Abbott prioritized the lives of his most vulnerable constituents over guns, then I wouldn’t be here today. I would be at home with Lexi,” she said. “Vote for Beto because a vote for Abbott is a grave mistake.”

About 35 family members boarded a bus from Uvalde on Friday morning to travel 280 miles and nearly five hours to the news conference in Edinburg, where the gubernatorial debate will be held. The debate will have no audience, so the family members will instead watch the event at an O’Rourke watch party before heading back home. The families of the Uvalde school shooting victims have been vocal in their advocacy for gun control measures, meeting with lawmakers in Austin and Washington and keeping the issue in news, even four months after the shooting.

O’Rourke launched into Abbott for not allowing people into the debate and said he will carry a card written by the families with him into the debate.

“They’re owed the memories of their daughters and sons kept alive forever,” he said. “And they’re also owed action.”

Gun safety is expected to be a major topic during the debate. The May shooting at Robb Elementary School is still fresh in the minds of many Texans and O’Rourke, whose home city of El Paso also experienced a mass shooting in 2019, has taken up gun control measures as one of his signature campaign issues, attacking Abbott over signing permitless carry into law last year.

O’Rourke was critical of Abbott for saying in a news conference after the shooting that “it could have been worse” had law enforcement not responded promptly. But the law enforcement response has subsequently been called into question after investigations by news outlets and state officials revealed it took police more than an hour to breach the room where the shooter had barricaded himself.

“What did he mean?” Felix Rubio, Lexi’s father, said during the news conference. “I don’t want to know. This November, let’s do what we can and vote Abbott out.”

Gloria Cazares said her 10-year-old daughter was “massacred” during the shooting and said her family’s calls for Abbott to call a special session to raise the age to buy assault rifles had gone ignored.

“We’ve asked to raise the age limit to purchase an assault rifle from 18 to 21. We’ve asked for red flag laws and background checks. In Texas we need someone to advocate for our children and families,” Cazares said. “We are not going anywhere, we are definitely not done and we are going to vote Abbott out.”

In a statement, Abbott’s spokeswoman Renae Eze said the governor is still working to assist the victims’ families.

“Governor Abbott and First Lady Abbott join all Texans in mourning every single innocent life lost that tragic day, and we pray for the families who are suffering from the loss of a loved one. Governor Abbott visited Uvalde over several weeks to meet individually with over 30 victims’ families to provide direct assistance, and every month since the tragedy to ensure they are receiving all the resources and support needed to heal,” she said.