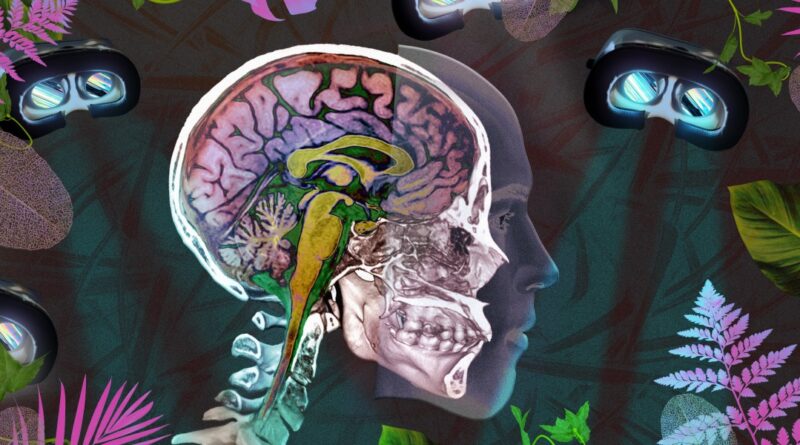 
As we inched nearer, I worried about infringing upon the other participants’ personal space. Then I remembered that oceans and thousands of miles separated me from them—and wasn’t ditching the notion of personal space the whole point? So I tried to settle into the intimacy.

“What happens in VR is that sense of completely forgetting about the existence of the external world,” says Agnieszka Sekula, a PhD candidate at the Centre for Human Psychopharmacology in Australia and a cofounder of a company that uses VR to enhance psychedelic therapy. “So there is definitely similarity there to this sense of experiencing an alternate reality under psychedelics that feels more real than what’s actually out there.”

But, she adds, “there’s definitely differences between what a psychedelic experience feels like and what virtual reality feels like.” Because of this, she appreciates that Isness-D charts a new path to transcendence instead of just mimicking one that existed already.

More research is needed on the enduring effects of an Isness-D experience and whether virtual reality, in general, can induce benefits similar to psychedelics. The dominant theory on how psychedelics improve clinical outcomes (a debate far from settled) is that their effect is driven by both the subjective experience of a trip and the drug’s neurochemical effect on the brain. Since VR only mirrors the subjective experience, its clinical benefit, which has yet to be rigorously tested, may not be as strong.

Jacob Aday, a psychiatry researcher at the University of California, San Francisco, says he wishes the study had measured participants’ mental wellness. He thinks VR likely can downregulate the default mode network—a brain network that’s active when our thoughts aren’t directed at a specific task, and which psychedelics can suppress (scientists theorize that this is what causes ego death). People shown awe-inspiring videos have diminished activity in this network. VR is better at inducing awe than regular video, so Isness-D might similarly dial it down.

Already, a startup called aNUma that spun out of Glowacki’s lab allows anyone with a VR headset to sign up for Isness sessions weekly. The startup sells a shortened version of Isness-D to companies for virtual wellness retreats, and provides a similar experience called Ripple to help patients, their families, and their caregivers cope with terminal illness. A coauthor of the paper describing Isness-D is even piloting it in couples and family therapy.

“What we’ve found is that representing people as pure luminosity really releases them from a lot of judgments and projections,” Glowacki says. That includes negative thoughts about their body and prejudices. He has personally facilitated aNUma sessions for cancer patients and their loved ones. One, a woman with pancreatic cancer, died days later. The last time she and her friends gathered was as mingling balls of light.

For one phase of my Isness-D experience, moving created a brief electric trail that marked where I’d just been. After a few moments of this, the narration prodded: “What does it feel like to see the past?” I started to think of people from my past who I missed or had hurt. In sloppy cursive, I used my finger to write their names in the air. Just as quickly as I scribbled them, I watched them vanish.

Darren415/iStock via Getty Images As U.S. MSOs line up to release quarterly earnings, Cantor Fitzgerald projects the group to post