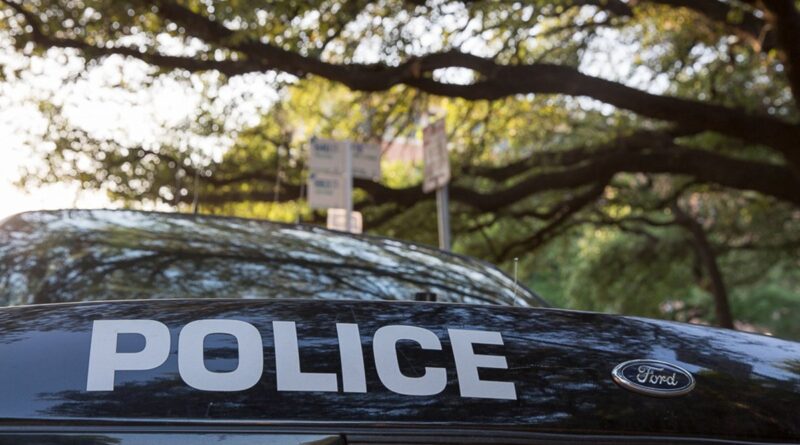 
WOLFE CITY — Few people knew his real name, but in the short six months that Shaun Lucas patrolled this tiny Texas community, he earned a reputation.

Black residents of Wolfe City, a town of 1,400 people about 70 miles north of Dallas, warned each other about the “new cop” and the harassing behavior a growing list of people had experienced over minor violations that would raise nary an eyebrow in the quiet community before Lucas arrived.

Residents say the 22-year-old officer had been overly aggressive with his traffic enforcement and berated longtime Black locals. At least one former resident who had moved out of town resisted visiting her parents within city limits, just to avoid Lucas. Black men told The Post about antagonistic interactions with the officer after being mistakenly arrested for public intoxication. Residents, both white and Black, shared a Facebook post in August warning of “another mean police officer” stopping “everything that moves at night.”

“Where the hell did he come from?” a bemused Veronica Brown questioned this week during a conversation with her sister and daughter outside their home. “He is the worst cop Wolfe City ever had.”

Lucas is being held on a murder charge at Collin County jail on $1 million bail after fatally shooting 31-year-old Jonathan Price last Saturday. The officer’s friends say the behavior described by residents and investigators is out of character for the man they know. His attorneys did not respond to requests for comment about the residents’ accounts.

On Thursday, Wolfe City fired Lucas — one of three officers on its roll — citing the fatal shooting. City attorney Daniel Ray said he did not think any complaints had been filed against Lucas before that incident. And a former employer in his hometown of Rockwall rejected the characterizations of Lucas he had seen in news reports and on social media.

“They’re making him sound like this redneck, you know, KKK member,” said Samee Dowlatshahi, owner of Samee’s Pizza Getti Restaurant. “Nothing like that. He’s nothing like that.”

But the more than a dozen residents who spoke to The Post described Lucas’ conduct as an anomaly for a town as small as Wolfe City, where people know their police chief and sergeant by their first names. Law enforcement officers typically would have known that Price — a beloved city worker, neighbor and friend — was not a threat, they said.

When Lucas, a rookie fresh out of the police academy, came upon Price at the local Kwik Chek convenience store last Saturday following a call about a “possible fight in progress,” nothing went down as it normally would in Wolfe City. The encounter began with a seemingly anodyne greeting before quickly turning violent, according to an investigator’s account.

When Lucas arrived around 8:24 p.m., Price offered a handshake and asked him multiple times, “You doing good?” according to a publicly released affidavit written by Texas Rangers investigator Laura Simmons. Price apologized for broken glass on the ground, saying that someone tried to “wrap me up.”

Lucas told the investigator that he believed Price was intoxicated and he tried to detain him. Price responded, “I can’t be detained” and resisted, according to the affidavit, prompting Lucas to pull out his Taser.

“While being tased, Price continued to walk toward Officer Lucas,” Simmons wrote. “Price appeared to reach out and grab the end of Officer Lucas’ taser.”

Their entire encounter was recorded by a body-worn camera, Simmons wrote. That footage has not been made public, though Price’s family has made formal requests to the city, Texas Rangers and Hunt County prosecutors.

It is extremely rare for the Texas Rangers to recommend murder charges against an officer who kills someone while on duty. In a statement, the Texas Department of Public Safety — which includes the Texas Rangers — said Price “resisted in a nonthreatening posture” before the officer used his Taser and gun, concluding that Lucas’ actions were “not justifiable force.”

Lucas’ attorney, Robert L. Rogers, objected to that conclusion in a statement Tuesday, describing Price as “an aggressive assailant who was attempting to take his taser.”

Price family attorneys say multiple witnesses told them that Price had been trying to stop a fight between a man and a woman inside the store before Lucas arrived. The witnesses told the family that Price raised his hands when Lucas appeared with an aggressive posture and was not close enough to grab the Taser, said attorney Blerim Elmazi.

“The situation already was calm. There was no problem” when Lucas arrived, said Elmazi, an attorney who works with social justice lawyer S. Lee Merritt. “Officer Lucas completely and unreasonably escalated a situation when there really was no situation to begin with.”

Many heartbroken city residents have rallied around their native son as news of his fatal shooting ricocheted through neighbors’ Facebook pages, and they condemned the officer’s actions.

“It just made me sick to my stomach,” said Cindy Stewart, who is white and a longtime resident. Lucas “is not even from here.”

Wolfe City is a predominantly white town, where about 1 in 5 people are Black or Hispanic. But residents are suffering a collective grief that transcends race, said Clarissa Brown, who is Black and a friend of the Price family. She said she grew up in a place that felt insulated from the overt racial bigotry that the Cotton Belt of North Texas would historically beget.

Generations of white and Black children went to school together, played football alongside each other and paraded down main street for homecoming as one body. Wolfe City is too small to harbor hatred, Brown said.

It’s the kind of small town where bank tellers can help a resident withdraw cash if they forget their bank card. Community policing here typically consists of walking up and down the red brick road of Main Street at night making sure each door is locked.

Former police Chief Jimmy Doolin, who served as an officer between 2006 and 2013, said small-town police work is a delicate balance between folksy civility and stern correction. He embedded in the community to learn the rhythm of neighbors and discern each situation. When several mobile phones were stolen at the high school, Doolin gathered a group of students to guilt-trip them into divulging the culprit. If people were having a good time grilling on a weekend, it was better to join them in a plate of barbecue than to become suspicious, he said.

Doolin said he never would have expected a Wolfe City police officer would be involved in yet another questioned shooting of a Black man by a white police officer — especially not this Black man.

Price was one of those Wolfe City scions who embraced the friendly ideal of “not seeing color” that residents say they hold dear. The night he was killed, Price was with one of his best friends, Jason Malone, a white man whose family Price dubbed his “2nd family” in a June Facebook post.

In that post, Price addressed the racial tensions gripping the nation by sharing his positive experiences with white friends and local police. He recalled police stops when he said he was justifiably pulled over by officers.

“I’ve never got that kind of ENERGY from the po-po,” Price wrote about charges of racism. “Not saying black lives don’t matter, but don’t forget about your own, or your experiences.”

But beneath Wolfe City’s genteel facade is an undercurrent of unresolved tensions, some residents say, that have slow boiled for years before Lucas’ arrival in town.

White residents overwhelmingly fill positions of power in local government. Residents recall only one Black mayor and one Black alderman in the city’s recent history. Few, if any, Black residents own businesses.

“In Wolfe City, there are good people. But you have to know who’s for you and who’s against you,” Veronica Brown said.

Brown’s cousin, James Alton Brown, said he was puzzled one August day when Lucas trailed behind him in a Chevy Suburban for a quarter mile as the 65-year-old walked home. Brown’s gait was slow and labored because of a severe limp. Lucas arrested him for public intoxication, records show.

“He thought I was drunk,” James Alton Brown said. “So he took me to jail.”

Brown said he tried to show the officer that he was drinking a soda, but Lucas charged him with resisting arrest. The public intoxication charge was later dropped, according to bail bond records, but he still faces resisting charges and hundreds of dollars in court fees.

Alexandria Childs, who is Black and was raised in Wolfe City, said her dad warned her about Lucas after Brown was arrested for public intoxication.

“His vibe was off,” Childs’ father warned. He told her that Childs and her brother needed to “be careful when I came to town,” she said.

Wolfe City police and other officials did not respond to multiple messages requesting Lucas’ personnel records.

The Wolfe City council fired Lucas on Thursday for “egregious violation” of city policies, but did not give specifics. A handful of people spoke at the first meeting the council had held since Price was killed, imploring city leaders to hire more experienced officers.

“Wolfe City is a tightknit community, and we join you in mourning Jonathan’s death and the events of the last week,” the mayor and council said in a statement. City officials declined to comment further about Lucas.

Lucas’ stepfather, Mike May, declined to comment for this story, but earlier this week he told Dallas television station WFAA that there’s “not a racist bone in that kid’s body.” Lucas’ sister could not be reached, and his girlfriend directed all communication to Lucas’ lawyer. The Post visited Lucas’ home on Wednesday, but no one answered the door.

Lucas’ mother died of kidney and liver failure after he started working at Samee’s Pizza Getti Restaurant in Rockwall when he was 15. His mother had asked Dowlatshahi to give Lucas the job because he was going through “teenage stuff” and she didn’t want him falling in with the wrong people, the restaurateur said.

“Within two or three years, he was basically doing everything. Front of the house, back of the house. He had a key to my restaurant. Very trustworthy,” Dowlatshahi said.

The loss of his mother motivated Lucas to pursue “what he wanted to do, because he wanted her to be proud of him,” Dowlatshahi said.

He eventually landed a job at the Hunt County Detention Center, and six months ago, he came to Dowlatshahi with the good news that he was offered the job in Wolfe City.

For his friends, Lucas’ reversal from a young officer living out a childhood dream to sitting behind bars on a murder charge is unfathomable.

“Every time he saw an officer or a first responder, I can recall him stopping and saying, ‘Thank you,’” said Caleb Thomas, who met Lucas in middle school and has known him for nearly 10 years. “Shaun has never been racist. He may have made some jokes in high school when he was 15 or 16, but everyone jokes around.”

Thomas felt sick to his stomach when he learned Lucas had been involved in the shooting and talked to him before he turned himself in to the Texas Rangers.

“I knew from the start that there was no way that this transpired because of someone’s skin color,” he said. “His biggest dream was to become a police officer. It’s now turned into his biggest nightmare.”